Welcome to San Juan, capital of Puerto Rico, USA. It’s one of the Caribbean’s favorite destinations welcoming cruise ship passengers from around the world. There’s much to explore in this tropical city whatever your interests. Whether you’re a history buff, a food maven, a shopper, a music lover or a beach bum you can fill your day with great memories in this fascinating and colorful city. Your ship will dock in Old San Juan, with its Five-Century old forts, the second oldest Cathedral in the Americas, blue cobblestoned streets, brilliantly colored buildings housing fascinating shops, great local restaurants and even the bar where the first Pina Colada is claimed to have been invented. All you have to do is just cross the street and you’re there.

Here’s what to do in San Juan for the day:

1. Hop aboard the free Trolley system

There’s no better way to get your bearings than to hop on one of the three Trolley routes that crisscross Old San Juan. The trolleys run Monday to Fridays from 7 am to 6 pm and on Saturdays and Sundays from 9 am to 7 pm. They run every 15 minutes and you can get on and off at any trolley stop. One of the trolleys is open-air, the other two are enclosed and air-conditioned. The best place for cruisers to board the trolleys is at Stop # 12. Walk to your left after you leave your ship and the sidewalk will take you past “La Casita”, headquarters of the Puerto Rico Tourism Office across from Pier #1. Stop in for maps or to ask any questions you have. From there, walk to Paseo de la Princesa.

There are over 400 beautifully restored 16th and 17th Century Spanish colonial buildings to see. Housed in some of them are some of the most creative and interesting boutiques in the Caribbean. Not to be missed is the Catedral de San Juan, first built in 1521, destroyed by a hurricane in 1526, rebuilt in 1540 only to be looted in 1598 and damaged in yet another hurricane in 1615. It’s a rare example of Medieval Architecture in the New World and it’s open daily from 8:30 am to 4 pm. Practically across the Street is El Convento, once inhabited by nuns, it is now a luxury hotel and a great place to stop for a drink on a warm day. Close by, a visit to La Fortaleza will equally delight both architecture buffs and gardeners alike. Also known as the Palacio de Santa Catalina it started life as a fortress later becoming the official Governor’s residence. It has been home to 170 governors of Puerto Rico. Free tours of the mansion and its gardens are offered in English on the hour Monday to Friday. Tours last about 40 minutes.

RELATED: In Old San Juan, Time is on Your Side

3. Take a break and visit Barrachina, the birthplace of the Pina Colada

Just a block from La Fortaleza at 104 Fortaleza Street, this 40-year old restaurant is the kind of “tourist trap” we wish there were more of. In a beautiful colonial building, with an interior courtyard filled with tropical plants, the restaurant starts serving Pina Coladas at 9:30 in the morning. It’s a point of pride that a man named don Ramon Portas Mingot first made the drink in this very restaurant in 1963. From 7:00 am on Barrachina serves breakfast and sandwiches on its second floor. At 11:00 am the first-floor restaurant serves a complete menu of Puerto Rican specialties at reasonable prices.

4. If you have an ear for music, visit the Pablo Casals Museum (Museo de Casals).

The World-renowned Spanish Cellist, Pablo Casals moved to Puerto Rico in 1956 where both his wife and his mother were born. King Juan Carlos and Queen Sofia of Spain honored his memory by opening this small museum in San Jose Plaza in Old San Juan. The museum is not only filled with memorabilia, it explores Casal’s music in a room that displays hundreds of his recordings. There are two hours of videos featuring live performances of his career as both a soloist and conductor of the Puerto Rico Symphony Orchestra. The performances of other maestros like Peter Serkin and Itzhak Perlman can also be viewed here. The museum is open Tuesday through Saturdays 9:30 am to 5:30 pm. Admission is just $1!

5. Take in the sights from the largest fortification in the Caribbean

Commonly known as El Morro, your cruise ship passed this immense 16th Century fortress on its way into San Juan Harbor. This six-level structure dates from 1540. Rising 140 feet above the sea with 18-foot-thick walls, it’s a maze of tunnels and dungeons, outposts and ramps. A highlight of El Morro as small, circular sentry boxes that have become a symbol of Puerto Rico. The views alone are well worth the price of admission. It was designated a National Historic Site in 1949 and in honor of the 500th Anniversary of the discovery of Puerto Rico by Christopher Columbus was restored in 1992. Part of the National Park Service, El Morro is open every day from 9 am to 6 pm except for Thanksgiving, Christmas and New Year’s Days. Admission is $5.00 for adults, children under 15 free.

6. Walk back to your ship along the Paseo del Morro

You can hop on the Open-Air Trolley at El Morro (Stop #26) and be dropped off right at the pier. Or you can take a walk along the sea wall on the Paseo del Morro. Along the way, you’ll experience fantastic views of San Juan Bay while colorful boats bob up and down, and pelicans line the shore. There are benches to relax on as Paseo del Morro becomes Paseo de la Princesa, San Juan’s most beloved of promenades. It’s a beautifully restored walk and at its end, you can reward yourself with a ‘piragua’—shaved ice topped with tropically flavored syrups. There are Art exhibits, a complete craft fair and if you’re hungry, Café La Princesa offers delicious food and drinks in an outdoor setting. At the end of the Paseo, is the San Juan Gate which leads right into the heart of the city where your cruise ship awaits and where your memories of San Juan will linger long after you have sailed.

A second Cruise Ship Terminal, the Pan-American Pier is further away on Isla Grande. It’s about a $10- and 10-15-minute cab ride from Old San Juan if your cruise line doesn’t offer a free shuttle service. The Pan American Pier is most often used by ships sailing from San Juan. The Cruise Terminal in Old San Juan is where most Cruise Ships dock for the day.

Wondering what to do in San Juan for the day? Now you know exactly how to explore this incredible city!

It’s been a quiet year for one of the world’s busiest cruise ports, but those who w 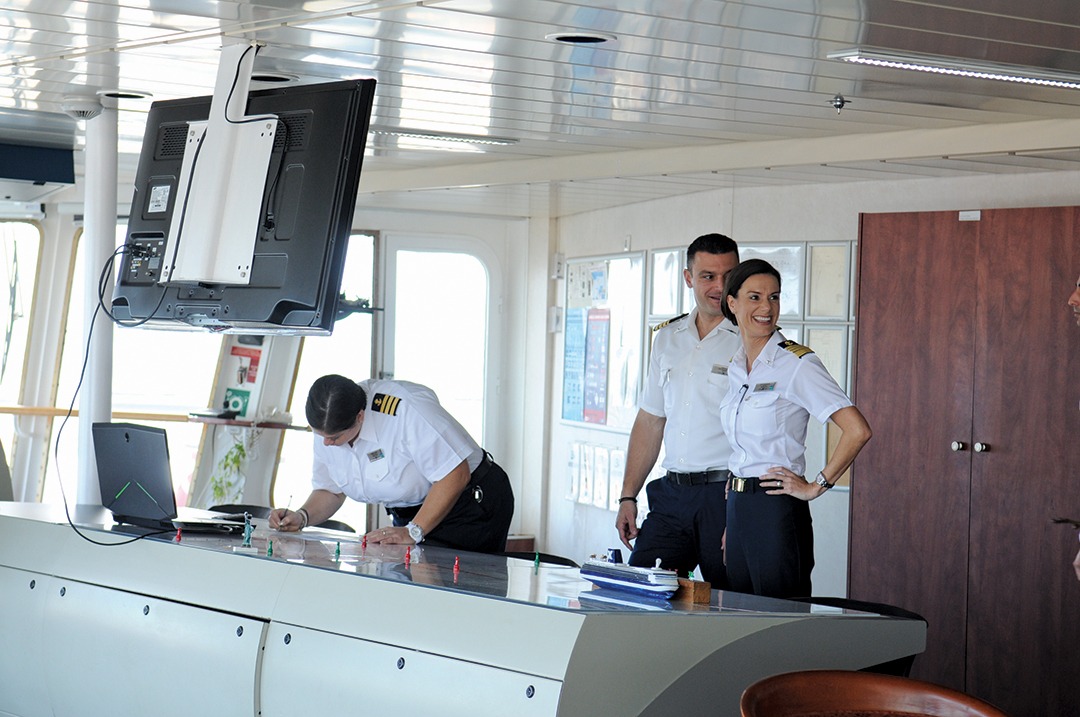 A Day in the Life of Captain Kate McCue By Bob Cooper When Kate McCue, 37, took command of Celebrity

Your favorite oversight entity has a new plan for cruising, but some in the industry are already rai