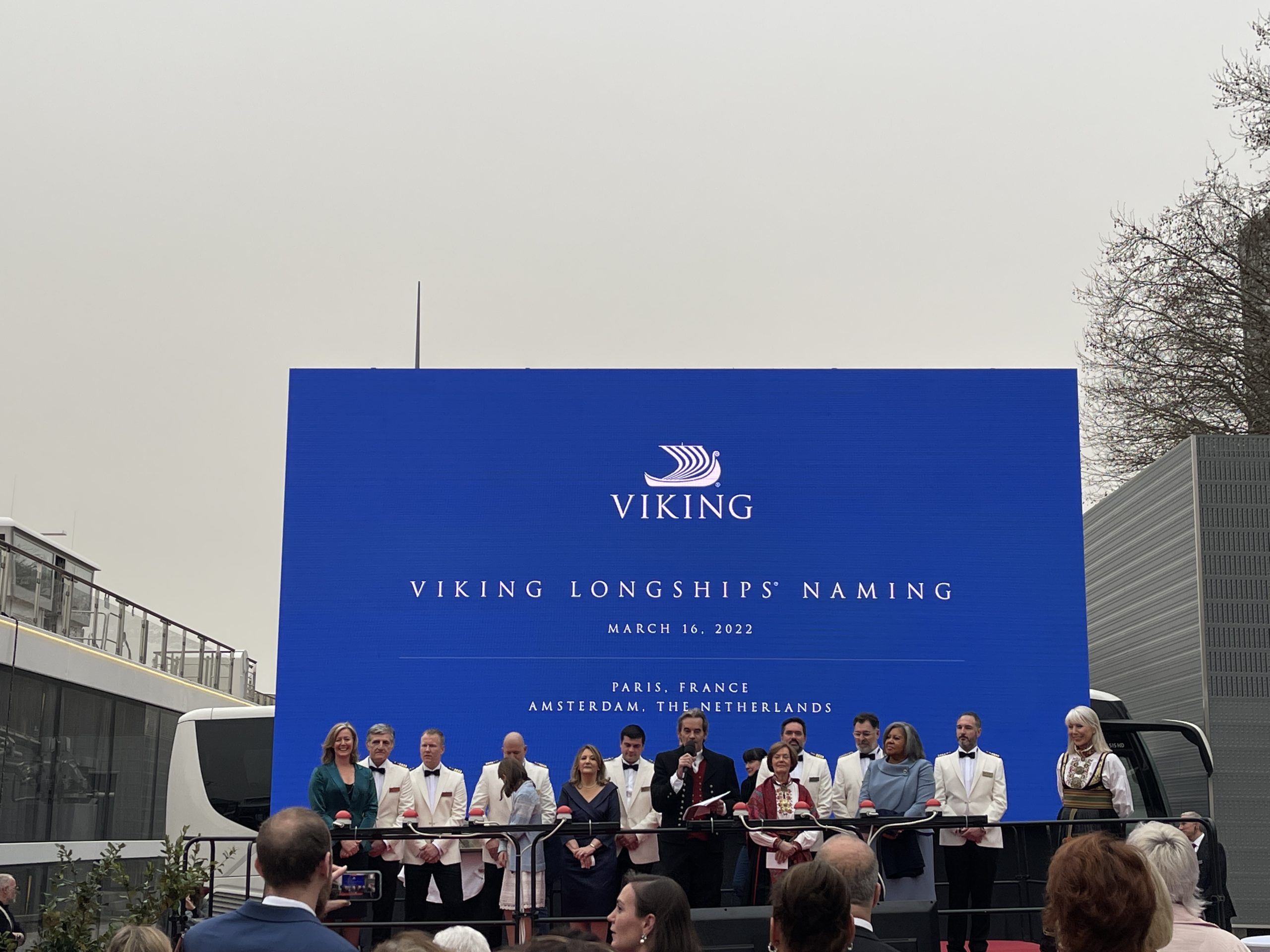 What sets a great cruise ship naming ceremony apart from just a good one?

Along the slate-colored stripe of water know as the Seine during a crisp winter day in Paris, Viking Cruises named four new river ships (the other four in Amsterdam) in a special ceremony attended by Chairman Torstein Hagen, the eight new Viking Godmothers, representatives from Viking and a host of cruise and travel media, including yours truly.

Viking Fjorgyn, Viking Radgrid, Viking Skaga and Viking Kari sat dutifully by at the stunning Pont de Grennelle in the heart of Paris, all built specifically for the Seine and this particular port. At 125 meters, the four meet the maximum length requirement, unlike the too-long 135 meter older Viking Longships which call down the river at nearby Le Pecq in St. Germain-en-Laye. The other four, Viking Egdir, Viking Gersemi, Viking Gymir andViking Hervor were named at the same time via video conference from the Netherlands.

Prior to the ceremonies, Viking Chairman Torstein Hagen held a presentation for the media in attendance on board Viking Kari where he gave an update on the brand to the media in attendance. Along with updates on the future fleet (five new ocean ships are confirmed with possibly 4 more!), the eight new ship Godmothers and the upcoming adventure ship Viking Octantis. Hagen also announced during the presentation that masks would become optional for Viking guests starting April 1, 2022.

He also spoke on Viking’s 25 years in the cruise space and how proud he was to welcome the new Godmothers to the Viking family.

“As we mark 25 years of sailing the iconic waterways of the world, it is always a proud day when we welcome new ships to our fleet and offer more opportunities for curious travelers to explore the world in comfort,” said he. “Today we are especially pleased to honor eight talented and accomplished individuals as godmothers of our newest river ships, and we look forward to the start of another season of European river voyages.”

Each Godmother stepped up to the row of red buttons and after a blessing, sent a bottle of Aquavit smashing against the side of their ship. The list of Godmothers, their accomplishments and their ships are below!

Alma Deutscher, Godmother of Viking Gymir – A musical phenomenon, Alma captivates the classical world with her talents as a violinist, pianist, composer and conductor, and at just 17 years old was hailed as the “new Mozart” at an early age. She recently appeared on an episode of Viking’s award-winning enrichment channel, Viking.TV (Anne Diamond Welcomes Back Composer and Musician Alma Deutscher), where she discussed her upcoming concert series, which will be exclusive for Viking guests on select river voyages visiting Vienna.

Helen Deutscher, Godmother of Viking Egdir – A violinist, pianist and vocalist, Helen is an accomplished musician who honed her musical and performance skills at the Music Gymnasium in Vienna and as a member of the Vienna State Opera’s children’s chorus; she has also performed in several productions of her sister Miss Alma Deutscher’s opera, Cinderella. Helen and Alma recently appeared together on an episode of Viking.TV (Anne Diamond Interviews Classical Musicians, Alma & Helen Deutscher) where they discussed their remarkable lives and many musical milestones.

Dr. Janie Deutscher, Godmother of Viking Radgrid – An author and educator, Dr. Deutscher is also an accomplished musician and earned an organ scholarship to Oxford University where she later taught medieval literature; in recent years, she has concentrated on homeschooling and supporting the musical ambitions of her two daughters, Alma and Helen, godmothers of Viking Gymir and Viking Egdir, respectfully.

Brenda Hunsberger, Godmother of Viking Hervor – For more than four decades, Ms. Hunsberger, Senior Vice President of Travel Services with AAA Club Alliance, has worked in the industry as an accomplished travel agent; she believes in the power of travel to transform perspectives and change lives.

Karryn Christopher, Godmother of Viking Gersemi – Ms. Christopher is Executive Vice President of Preferred Partnerships & Marketing for Signature Travel Network, a member-owned travel cooperative established in 1956, where she has led the transformation of the company’s sales and marketing division.

Ghislaine Wood, Godmother of Viking Fjorgyn – As the Deputy Director of the University of East Anglia’s Sainsbury Centre, one of the most important public university art galleries in Great Britain, Ms. Wood carefully curates exhibitions, including the upcoming “Visions of Ancient Egypt,” which was developed in partnership with Viking; opening in September 2022, the exhibit will honor the 100th anniversary of the discovery of King Tutankhamun’s tomb. Ms. Wood discussed her work at the Sainsbury Centre in a recent episode of Viking.TV (Explore Alaskan Objects at the Sainsbury Centre with Ghislaine Wood), including the origins of their Alaska collection which examines how indigenous Alaskan communities developed technologies and tools to adapt to their environment.

Muriel Wilson, Godmother of Viking Skaga – As the Director of Event Strategy & Sponsorships for Virtuoso, Ltd., Ms. Wilson has been a distinguished staff member of the global network of agencies for more than 40 years and leverages her deep knowledge of the industry to develop quality hospitality and travel experiences for Virtuoso’s travel advisors and preferred partners as the Director of Event Strategy & Sponsorship.

Kari Garmann, Godmother of Viking Kari – Former member of The Parliament of Norway and Oslo City Council, Ms. Garmann has made valuable contributions to Norway in the areas of government, business and banking throughout her career.