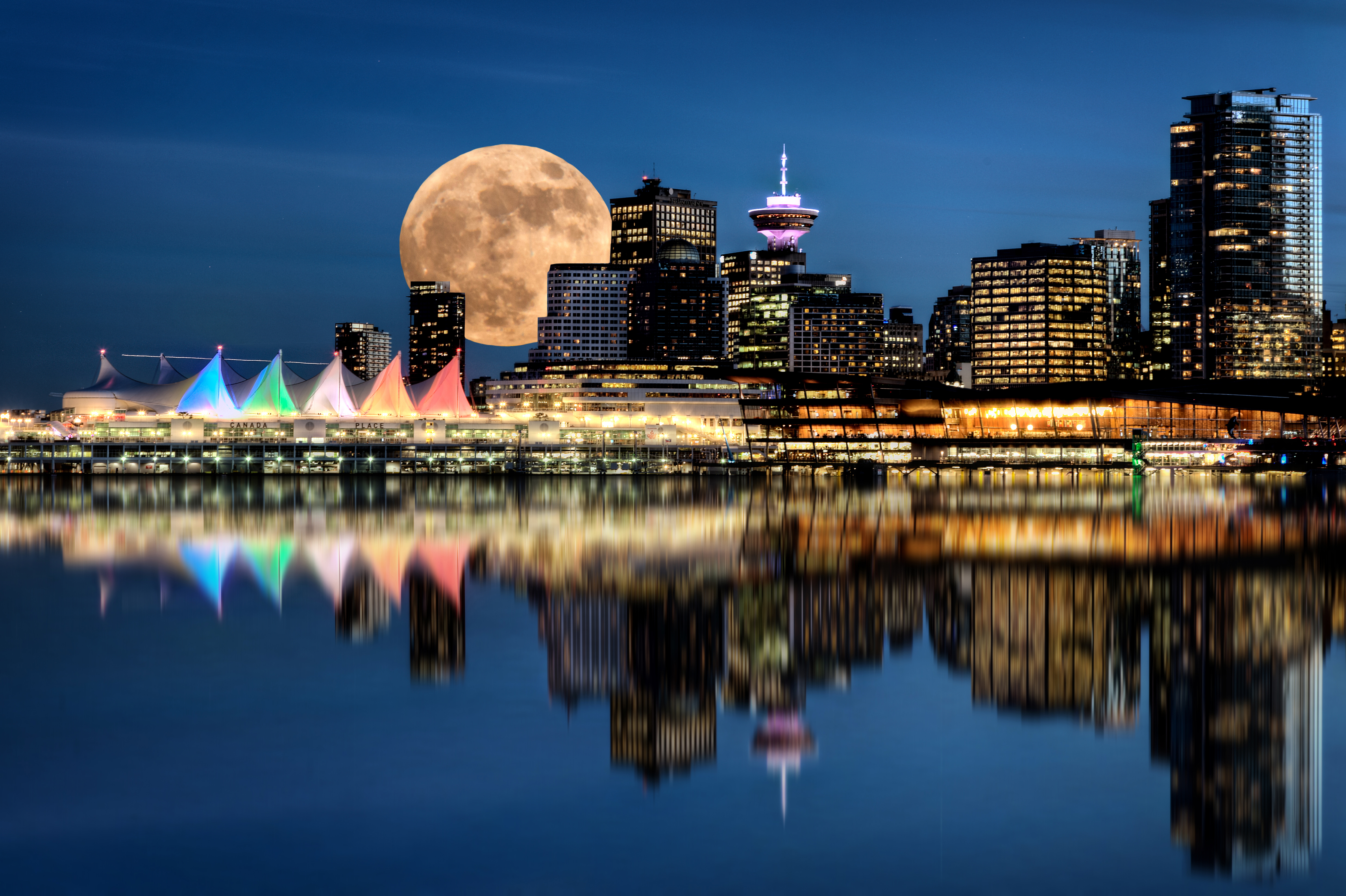 Can you name a city that has hosted the Winter Olympic Games, served as the backdrop for numerous blockbuster Hollywood movies, and is also consistently ranked among those with the best quality of life?

The vibrant west coast Canadian city of Vancouver, British Columbia features modern urban style on the edge of lush rainforests, mountain peaks, and a jaw-dropping coastline, making it one of the most popular destinations for an all-in-one vacation.

It’s the perfect place to visit if you’re considering going on an Alaska cruise, as Vancouver is the home port for many ships, and the city makes a great jumping-off point for further adventures throughout Western Canada and even the Canadian Rockies. Whatever you decide, make sure to leave enough time to truly discover all Vancouver has to offer.

Here are the top 10 reasons to visit Vancouver and beyond.

How many cities have you visited that feature a 1,000+-acre park bordering downtown? Vancouver’s Stanley Park rests along the Burrard Inlet and the entrance of Vancouver Harbour, and remains a pristine slice of natural woodland with scenic beaches, hiking trails and several points of interest such as the Vancouver Aquarium, a miniature railway and the Brockton Point Lighthouse. Despite being so close to the hustle and bustle of the city, Stanley Park is a quiet oasis for nature walks, picnics, beach days and some of the city’s best spots for photography. The top place to snap a pic? Check out Siwash Rock, a famous rock tower found along the Stanley Park Seawall path. 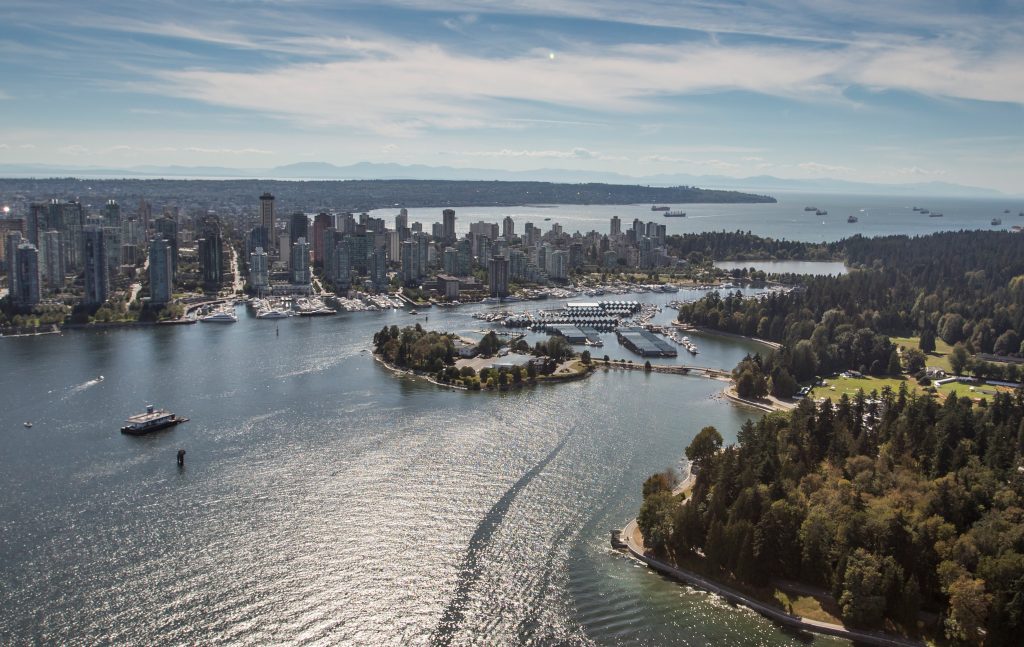 To truly appreciate the beauty of Vancouver and its surrounding landscapes, it helps to get a new perspective. A seaplane tour offers passengers a birds-eye view of incredible sights like the downtown skyline, Vancouver Harbour, the North Shore Mountains and Howe Sound. Weather permitting, most seaplane tour operators offer flights ranging from 10 to 35 minutes long[WU1] , making them easily scheduled into a daily itinerary. The planes take off from the water and the views are second to none. For those feeling more adventurous, book a flight to Vancouver Island to visit historic Victoria — the capital city of British Columbia — or the town of Tofino, where the wild still rules supreme. 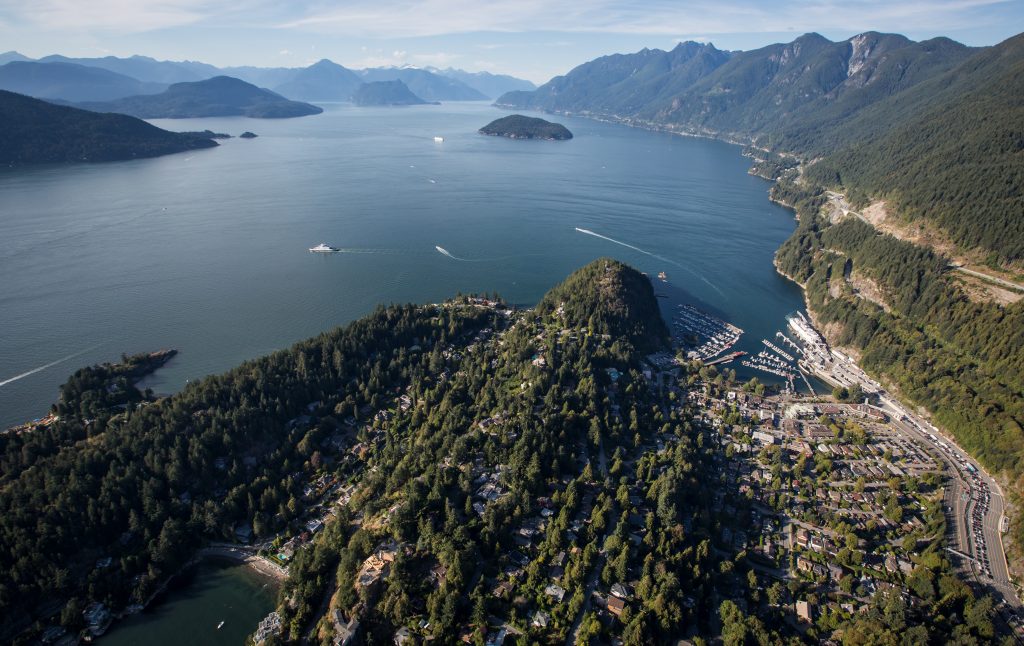 Horseshoe Bay is one of the many sights near Vancouver visible via a seaplane tour.

Not only is Vancouver a hotspot for gastronomy and cocktails, the city has also experienced a craft beer boom which has seen dozens of breweries pop up all over the city. A section of the city near Main Street, aptly known as Brewery Creek, should be a beer-lover’s first stop on a brewery tour of Vancouver. The actual creek was an important natural resource for Vancouver’s first European settlers during the late 1800s as it was one of the only nearby sources of freshwater.

While there are many to choose from, Brassneck Brewery, Strange Fellows Brewing and 33 Acres Brewing Company top the list of options. If you’re hungry, R&B Brewing Co. on East 4th Avenue serves up specialty pizzas and snacks to go with all their craft brews.

Snap a Selfie on Top of Grouse Mountain

Located just 15 minutes north of the city, Vancouver’s Grouse Mountain is waiting. While a popular ski resort in the winter, the summer months at Grouse Mountain offer a number of outdoor activities for the whole family including ziplines, a ropes course, hiking and biking trails, a skyride gondola and the incredible Eye of the Wind, a wind turbine with a panoramic glass viewing station at the top offering 360-degree views of Vancouver and the surrounding landscapes. The Observatory Restaurant at Grouse Mountain is a luxury restaurant located at the top of the mountain’s gondola. There’s no better place for an intimate dinner for two than watching the sun set over the Pacific Ocean from over 4,000 feet high.

Vancouver’s Gastown neighborhood is one of the oldest in the city and began as a single tavern just a stone’s throw from Vancouver Harbour. Modern Gastown is just a few blocks from the city’s cruise port and is chock full of scrumptious bites ranging from Asian fusion to wine bars, tapas and everything in between. If you’re really looking for a taste of Vancouver, then seafood needs to be on the menu. Rodney’s Oyster House is a great place to start for those looking for the freshest oysters, scallops, crab, salmon and more.

Start off with a steaming bowl of the fish stew before diving into all manner of crustaceans served with drawn butter and lemon. The high-end Blue Water Café in the Yaletown neighborhood is also a top choice, and the city boasts both excellent traditional sushi and flame-seared, aburi-style sushi. For aburi-style sushi, try Miku, located right next to the cruise terminal on the water, or Minami in Yaletown. On the more traditional side, Kishimoto Japanese Kitchen + Sushi Bar, Masayoshi and Toshi Sushi all serve incredible nigiri and the freshest of fish. 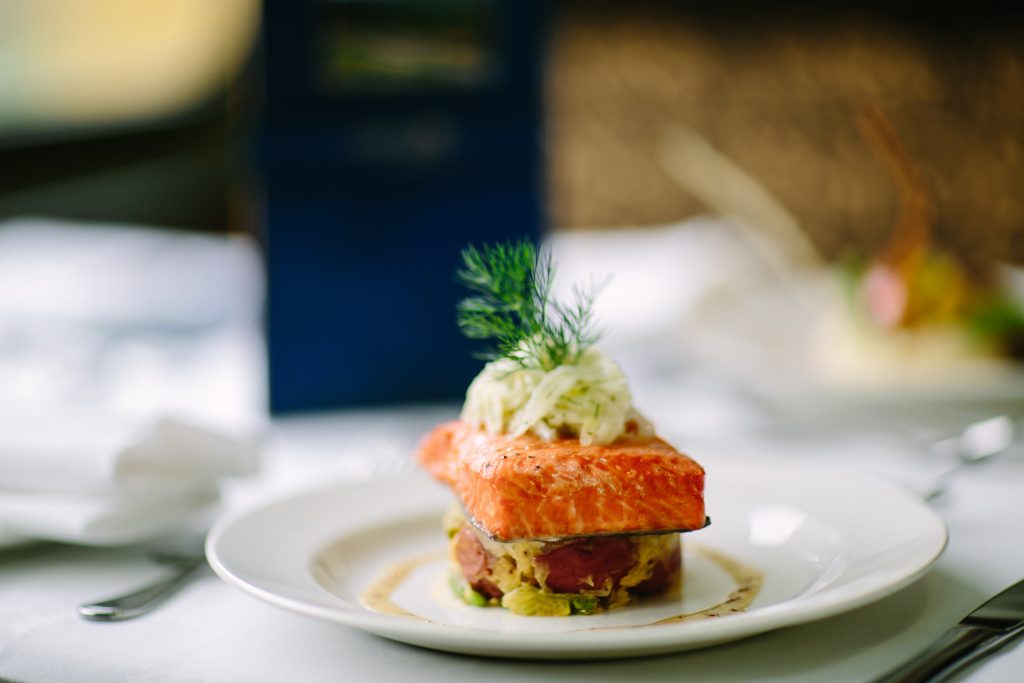 Salmon dish served on board Rocky Mountaineer in GoldLeaf Service.

Take a Walk on the Beach

While most cruisers think of the Caribbean when it comes to a beach day, Vancouver’s coastline and beaches are wildly underrated for walking and exploring. For a more traditional beach experience, check out Kitsilano Beach just across English Bay and slightly west of downtown. Called “Kits Beach” by the locals, it has a wide strip of soft sand and features tennis and basketball courts, gorgeous views of English Bay and Canada’s largest outdoor swimming pool. Head west from there past Jericho and Locarno Beaches, to Spanish Banks Beach Park for a great walk and endless sandflats to explore once the tide goes out.

See For Miles from the Vancouver Lookout

Since 1977, there’s been one building that stands out among Vancouver’s skyline. Vancouver Lookout, in the Harbour Centre just blocks from the cruise port, is a 28-story building with an observation deck at the top offering a 360-degree view of downtown as well as the North Shore Mountains, Burrard Inlet and east to the city’s suburbs. Take the lightning-fast elevator up to the top observation deck where tour guides offer insights into what you’re seeing in front of you. 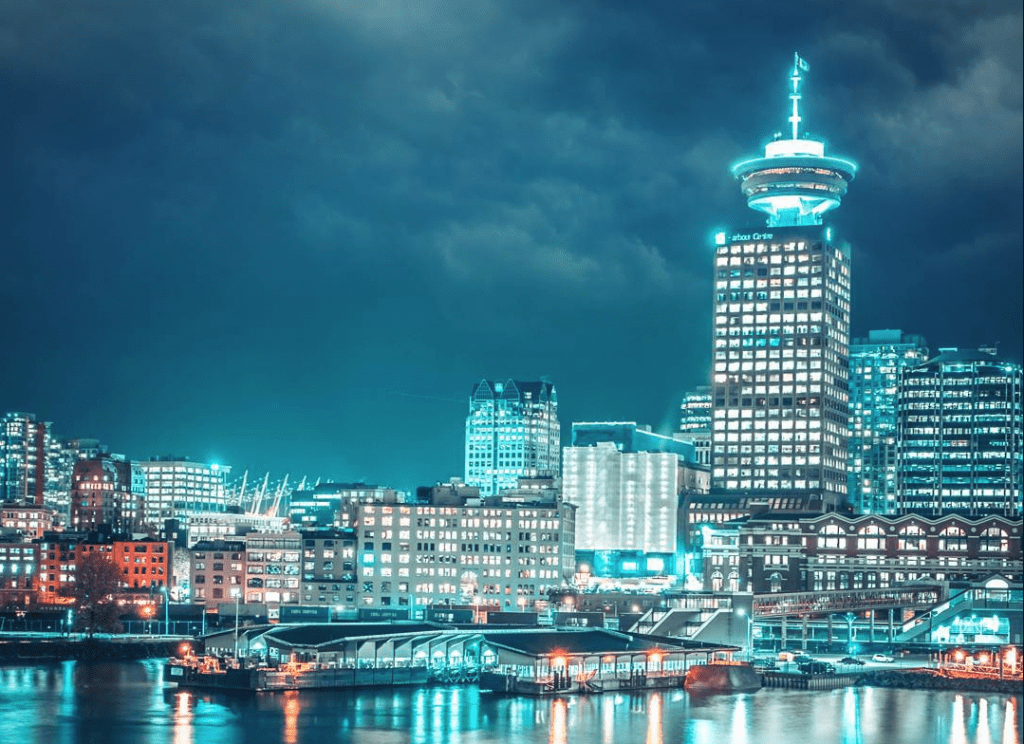 Seek Culture in the Rain

It’s no secret that the city can be rainy. That being said, Vancouver is still beautiful in any weather, and there are lots of indoor and cultural activities to enjoy around town on a day when the weather just isn’t cooperating. Granville Island features a huge indoor food and artisan market as well as unique boutiques and galleries to explore. The Museum of Vancouver features exhibits highlighting Vancouver’s storied history, while the Vancouver Art Gallery highlights art from Indigenous, Canadian and international artists.

The Museum of Anthropology at the University of British Columbia showcases a variety of international art and cultural exhibits, while emphasizing the works – including totems and carvings – of Indigenous artists. Vancouver sits on the traditional, ancestral and unceded territories of the  Musqueam, Squamish and Tsleil-Waututh people, so there is a lot of rich history to discover here.

Between the first budding blossoms of spring, and the rich burgundies and apricots of the fall foliage, Alaska welcomes thousands of guests arriving on cruise ships. From the Port of Vancouver in the downtown core, ships of all sizes depart for the Pacific Northwest’s famous Inside Passage. It’s hard not to feel like Lewis and Clark as the ship passes majestic glaciers and navigates fjords, winding its way deeper into the wild. You may see a whale breach with a colossal splash or an eagle resting along the coastal forests, and it’s here that humanity takes a backseat to the wonders of Mother Nature.

Alaska’s rustic seaside towns are perfect for exploration. Ports like Ketchikan, Skagway or Juneau have unique histories and more than a full day’s worth of activities to enjoy. Go whalewatching, hiking, rafting, flightseeing or explore the local shops and museums. Don’t skip having a meal at one of the local restaurants or a pint at a downtown pub. 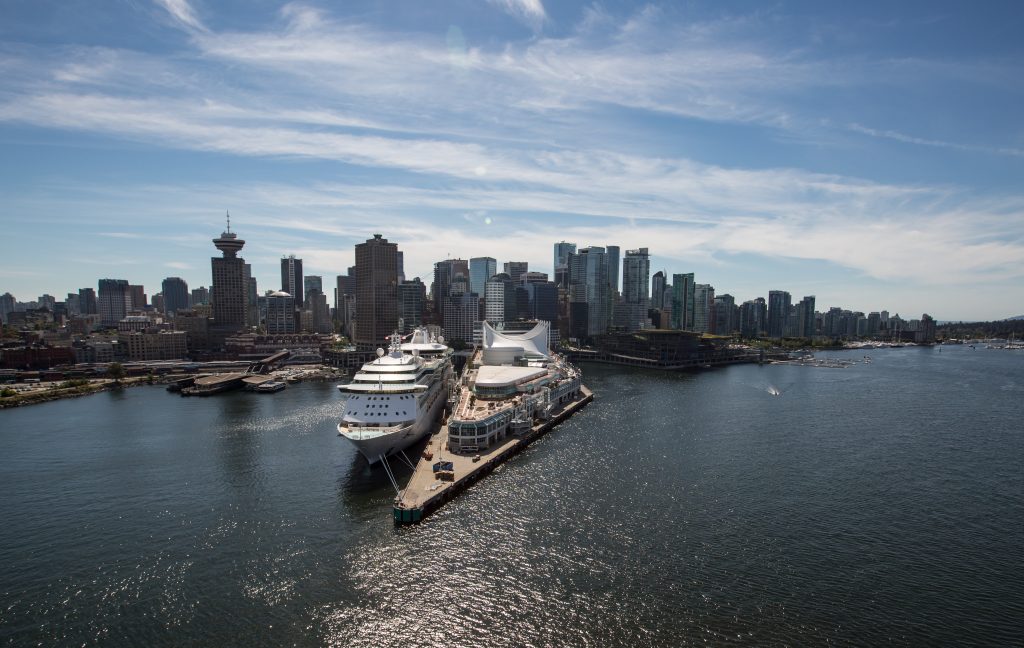 Adventure to the Canadian Rockies

For the past 30 years, there’s been a train journey that must be experienced to be believed. Rocky Mountaineer offers luxurious rail experiences between Vancouver and the Canadian Rockies, showcasing the best scenery Western Canada has to offer — a journey that pairs perfectly with an Alaska cruise. Begin your vacation in Vancouver and board a ship destined for Alaska; upon your return, take one of Rocky Mountaineer’s three outstanding rail routes: First Passage to the West, Journey through the Clouds, and Rainforest to Gold Rush, traveling to iconic mountain destinations like Banff, Lake Louise or Jasper. You can also experience the route in the opposite direction, taking your cruise after your train journey. Rocky Mountaineer partners with Holland America Line, but you can add a Rocky Mountaineer train journey to any Alaska cruise departing from Vancouver.

Each rail route features unique highlights in Western Canada and the Canadian Rockies. The First Passage to the West rail route travels between Vancouver and Banff or Lake Louise, while the other two travel to the rustic mountain town of Jasper. Their two exceptional service levels, GoldLeaf Service and SilverLeaf Service; spacious, glass-dome train coaches; attentive Hosts and larger-than-life scenery make a Rocky Mountaineer journey a journey to remember.

The gateway to Alaska and the Canadian Rockies are waiting for you! Make your next vacation an unforgettable one when you visit beautiful Vancouver! 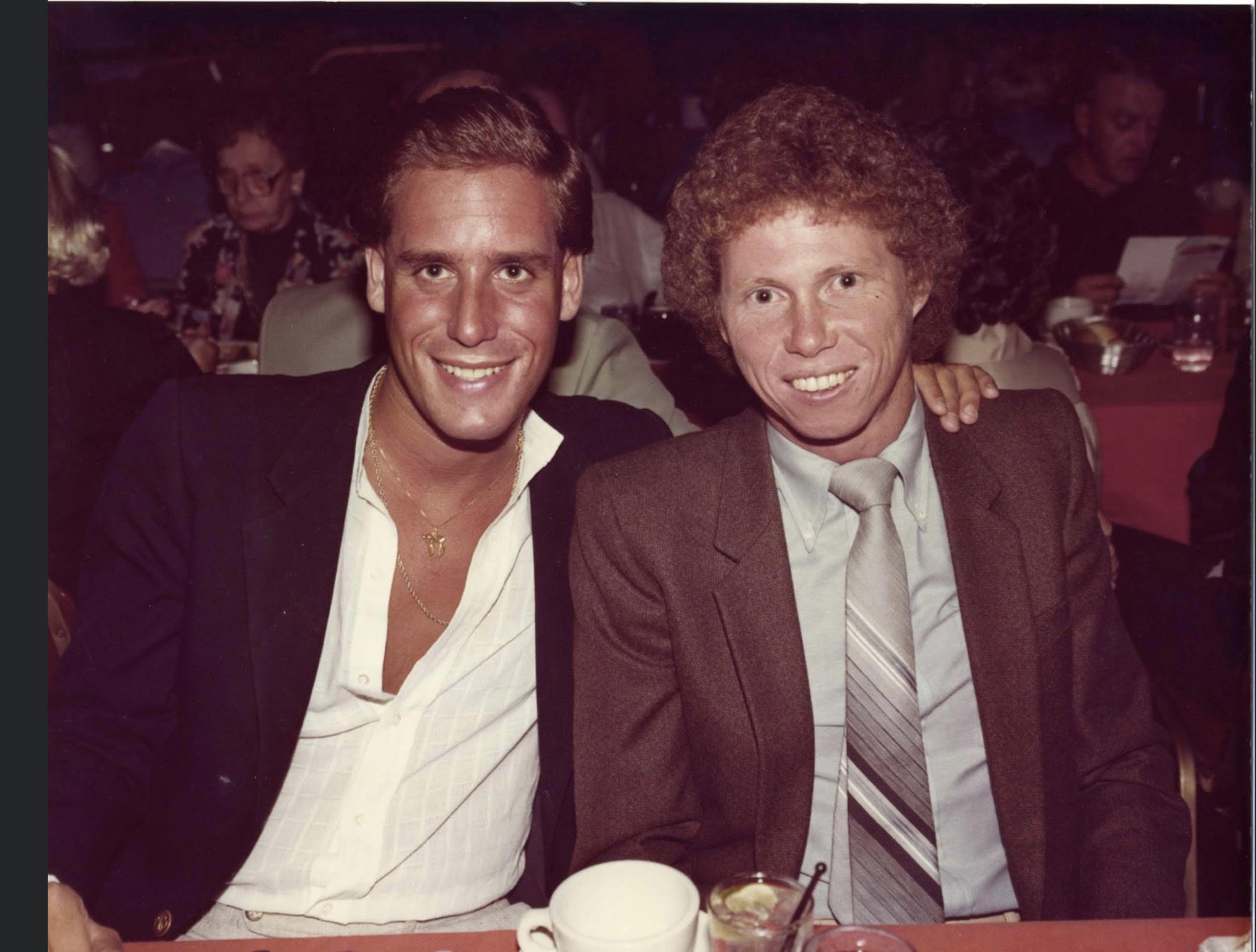 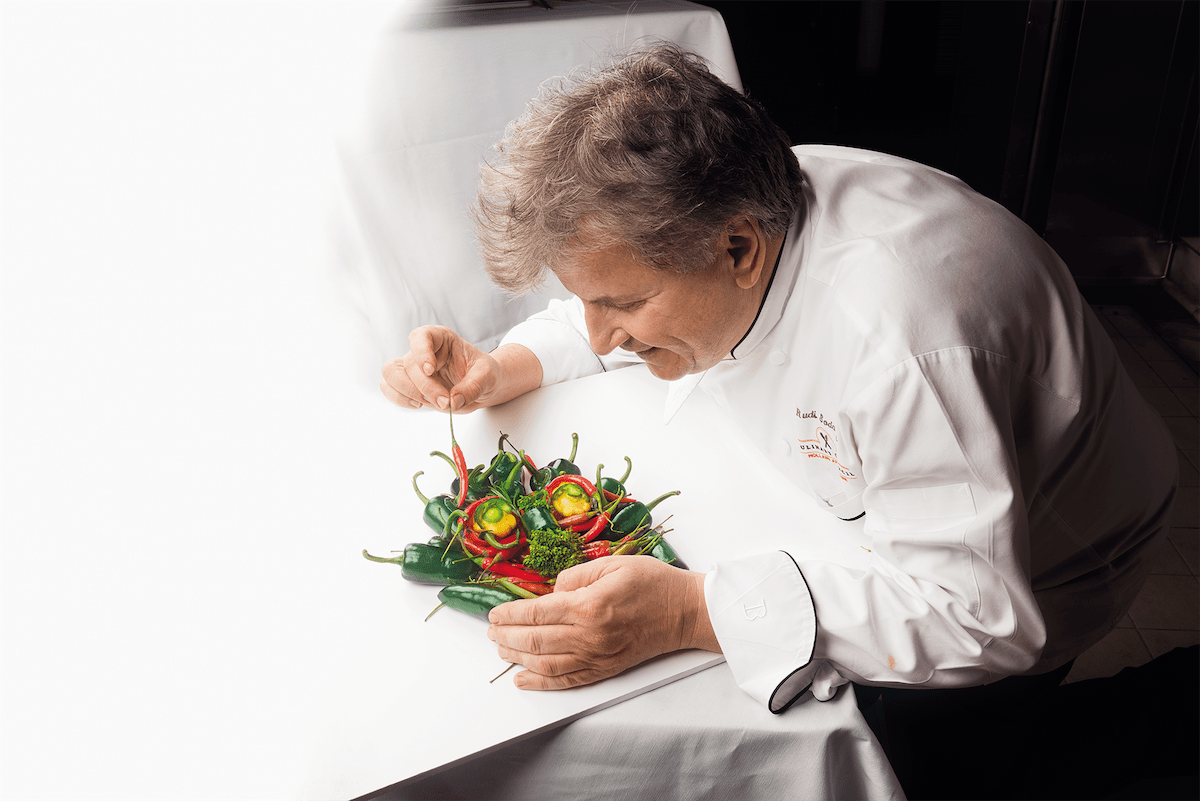 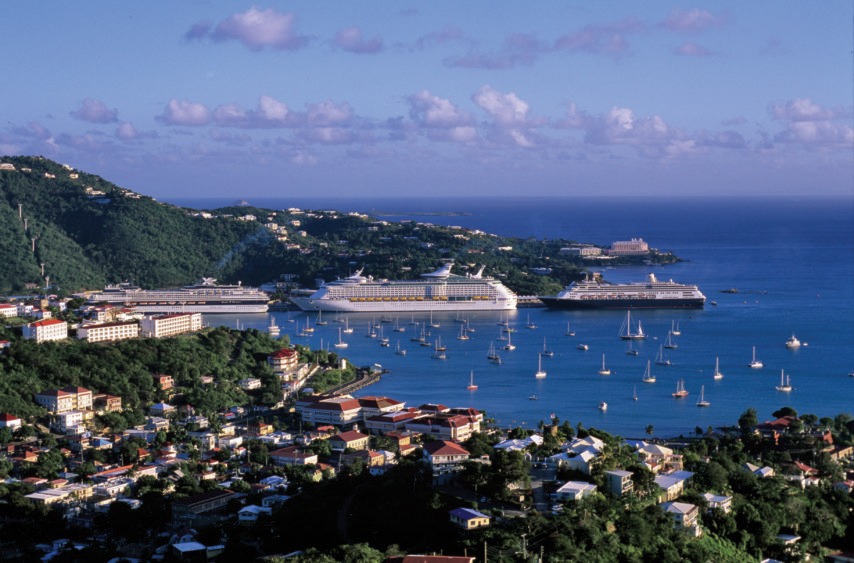 LIKE A LOCAL Livin’ in the USVI By Carol Bareuther Sure, there are guidebooks that list every rest