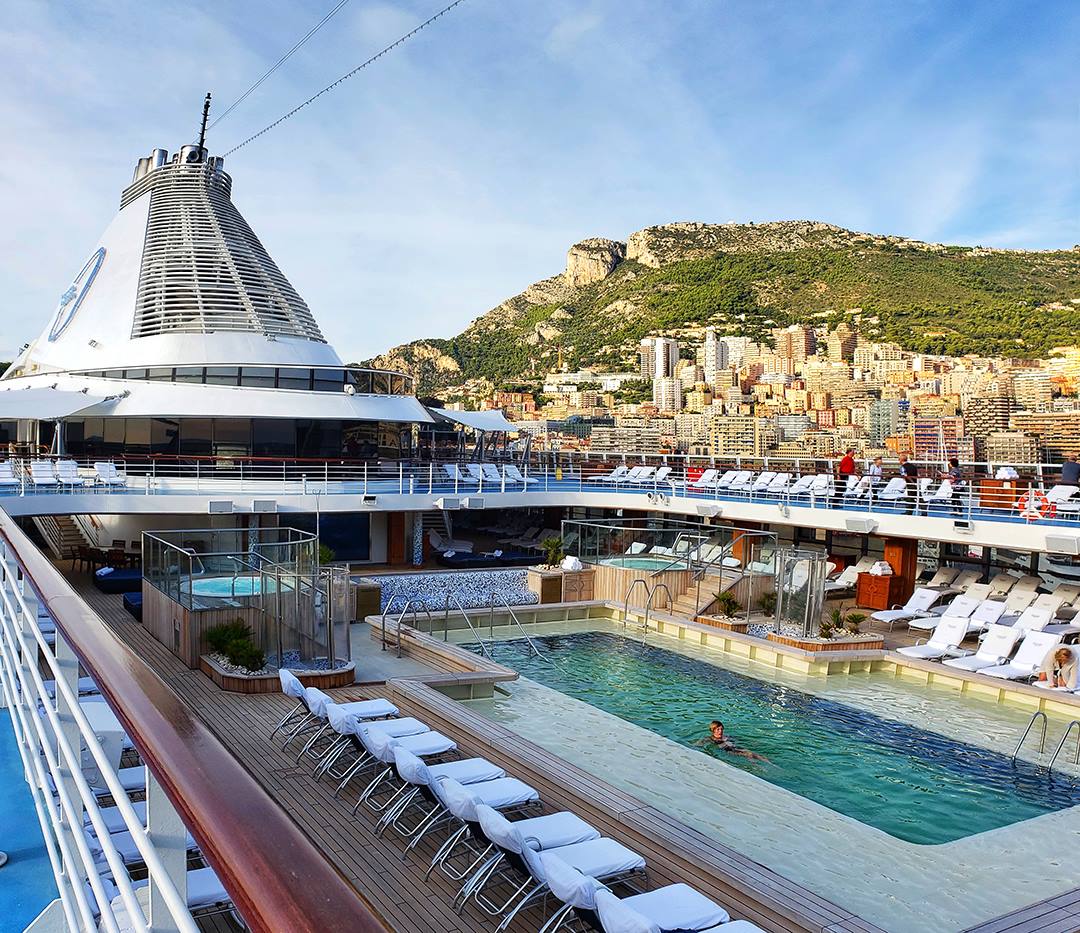 A Calmer Kind of Cruise Oceania Cruises Marina offers a classic take on serenity at sea.

From its inception earlier in the new century until now, Oceania Cruises held a unique position in the cruise industry: It was a substantial, well-respected cruise line that dominated its niche . . . but it had never built a ship of its own.

That’s because it didn’t have to. In 2001, Renaissance Cruises went into bankruptcy, leaving behind a fleet of eight practically brand-new midsized vessels. Oceania cofounder Frank Del Rio, a former Renaissance CEO, took advantage of that situation by creating Oceania around two of the Renaissance ships, which made their first voyages for the line in mid-2003. In 2005, Del Rio scooped up a third ex-Renaissance ship, making for a tidy little fleet.

Fast forward to early 2007. With success under its belt and a growth plan in its pocket, Oceania secured an $850 million capital investment from the very deep-pocketed Apollo Management group, which also controls Regent Seven Seas Cruises. Less than three weeks later, Oceania announced plans to build its first new vessels, a pair of twin, 1,260-passenger, 65,000-ton ships that would, in Frank Del Rio’s words, “define upper-premium cruising for years to come.” 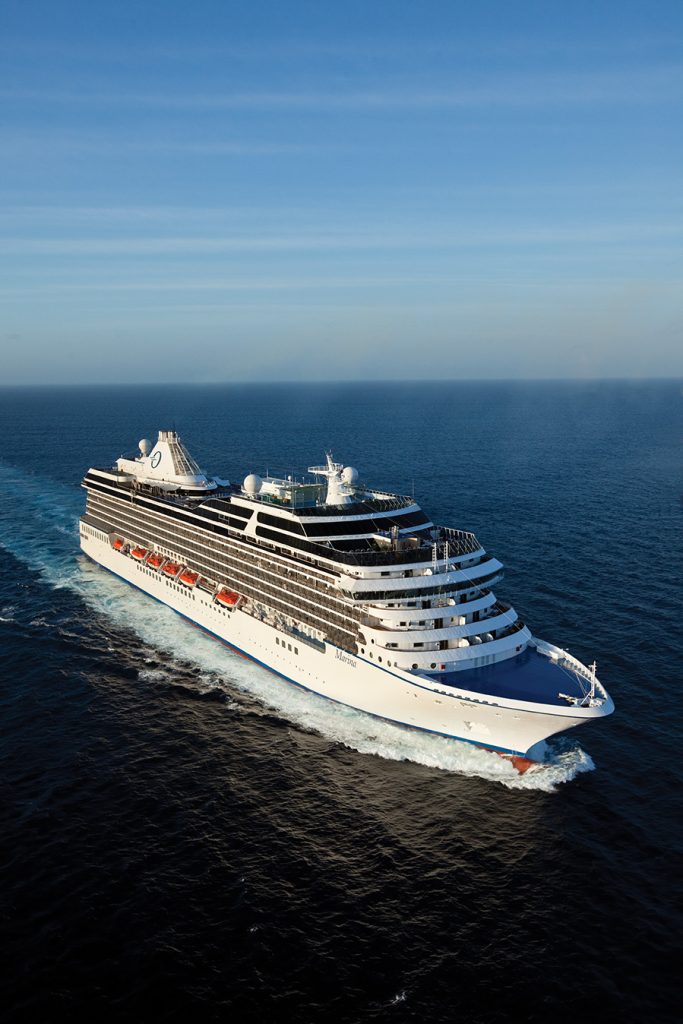 In January, Oceania took the keys to the first of those ships, Marina, at a ceremony at Fincantieri’s Sestri Ponente shipyard, near Genoa, Italy.

Was the new ship worth the wait? Definitely. In a cruise world that’s increasingly reliant on gimmicks, flash, and special effects, Marina shines by being a quiet, traditional ship whose comfortable atmosphere is just fancy enough that you expect high-class service — and get it.

There’s nothing in-your-face about Marina. Like its older fleet mates, the ship offers an upscale, mature, and unhurried vibe, with few activities or announcements to break your mood. Calmness reigns, and guests are mostly left alone to do whatever they like. In the public areas, Marina goes for a classic look: part boutique hotel, part club, part upscale home. Even the ship’s showiest space, the two-story reception lobby with its centerpiece Lalique stairway, is built on a scale that comforts rather than overwhelms. Despite the cozy scale, the ship actually has one of the highest passenger-space ratios in the business — higher than on any other mainstream or premium ship, and bested only by the pricier luxury ships.

Marina really shines in terms of dining. In addition to the classic main dining room and buffet, there are four excellent specialty restaurants, including the only restaurant anywhere in the world — on land or sea — created by celebrity chef Jacques Pepin. For those who like to wear the toque themselves, Marina also offers the only full, hands-on teaching kitchen in the cruise business, created in collaboration with Bon Appétit magazine.

Like Marina’s public rooms, her 282-square-foot veranda cabins offer a real sense of space, and represent the vast majority of the ship’s accommodations. Done up with dark, traditional wood paneling and furniture, they offer comfortable sitting areas and balconies, spacious and elegant marble bathrooms, and super-plush “Prestige Tranquility Beds,” a confection of Egyptian cotton linens, down comforters, and multilayered mattresses. Closet space could be more generous considering the line’s mostly longish itineraries, and shower stalls are challenging for anyone taller than about 6′2″, but otherwise the rooms get a big thumbs-up.

Marina offers six levels of suites, all of which come with butler service and a slew of perks. At the entry level, the 420-square-foot Penthouse Suites are like high-end hotel rooms, with a large living area and extra-large marble-and-granite bathroom with separate tub and shower. The ship’s biggest digs are its three 2,000-square-foot Owners Suites, designed by the folks at Ralph Lauren Home and outfitted with their own furniture, fabrics, and bedding. They’re movie-star showy, from their dramatic entry rooms to their art deco-meets-safari living rooms, enormous balconies with Jacuzzi tubs, and private fitness rooms.

Marina is one of the best “restaurant ships” at sea, offering a remarkable number of options considering its fairly small size. The open-seating main Grand Dining Room is an absolute knockout, with a sloping entranceway that makes you feel as if the room is opening up to you as you walk in. The real action, though, is in the ship’s four specialty restaurants, of which Jacques, created by Jacques Pepin, is the most talked-about. Designed like a homey French bistro (with traditional oak floors, antiqued furniture, and mementoes and paintings from Pepin’s own collection), it has a menu to match, serving traditional French country cuisine pumped up with a little extra zest. It also serves the best bread I’ve ever had on a cruise ship, bar none.

For me, though, the specialty dining winner was Red Ginger, a pan-Asian restaurant with a dark, contemporary design and exquisite food, including an excellent (and spicy) Thai vegetable curry. Other specialty options include the Polo Grill steakhouse and the Mediterranean Toscana, both of which were already institutions on Oceania’s three older ships. Dining at all these specialty restaurants is included in your cruise fare. For something extra-special, there’s La Reserve, serving seven-course wine-pairing dinners ($75 per person, with a maximum of 24 guests), and Privée, a VIP space that fairly demands you dress like a hip-hop star out on the town. Done up in gleaming white and red, with a white Venini glass chandelier overhead, the room is available at a flat rate of $1,000 and offers a seven-course tasting menu for a maximum of eight guests, designed for you after a consultation with the executive chef.

The centrally located Martinis lounge on Deck 6 is Marina’s coziest public lounge, stylish but informal, offering a vast martini menu and piano music in the evenings. As a caffeinated alternative, grab a cappuccino at the lovely Baristas coffee bar, which overlooks the pool deck from a cozy perch on Deck 14. On the counter, small domed dishes hold tiny biscotti and other mini-pastries, making the experience all the sweeter.

For a great bonding experience, sign up for a class at the Bon Appétit Culinary Center on Deck 12. This hands-on teaching kitchen offers classes in modern Greek cuisine, southwestern cuisine, American classics, homemade pasta, and more, with 24 guests pairing up at its 12 cooking stations, each of which has its own burners, cutting board, and sink. Classes cost $49 per person.

To create its stunning spa, Oceania partnered with the legendary Canyon Ranch, which is responsible both for the look and feel of the space as well as its extensive menu of treatments.

Sitting up toward the bow on Deck 14, the 10,000-square-foot facility offers more than four dozen private spa treatments, including a variety of Asian therapies (ayurvedic massage, Thai massage, reflexology, shiatsu, acupuncture), traditional massages and facials, and specialty treatments such as Organic Seaweed Body Wraps and Ocean Scrub exfoliating body treatments. There’s also a Thermal Suite of steamrooms, saunas, and cooling showers; indoor relaxation areas; and a private sundeck with its own thalassotherapy spa pool. The latter is the best “get away from it all” outdoor space on board, where spa guests (or anyone who wants to buy a day pass) can feel like they’re aboard their own private yacht.

Marina is as relaxed at night as it is during the day, with entertainment limited to piano music at Martinis, gambling in the casino, dancing at Horizons nightclub, a string quartet in the atrium, and magicians, comedians, and other guest entertainers at the main Marina Lounge.

The one decidedly “after hours” spot on board is the Casino Bar, which was designed to be a 180-degree shift from Marina’s overall “traditional” look. Heading forward from the Grand Dining Room through the very traditional Grand Lounge, hang a louie into the glowing magenta tunnel and whammo, you’re in a world of LED-backlit onyx wall panels, Swarovski crystal ornamentation, Picasso prints, and silvery, fantastical chairs and barstools. It’s like getting past the velvet rope into an exclusive basement nightclub.

Then don’t take this ship. Like all the other Oceania vessels, Marina offers no children’s programming of any kind.

Marina isn’t a “destination” ship full of whiz-bang attractions, so its must-sees and must-dos are quieter, more personal touches: Nuzzling into one of the buttery leather armchairs in the library and reading a good book … Grabbing one of the excellent chocolate croissants served during the continental breakfast buffet at Horizons Lounge … Catching the house pianist at Martinis tickling the keys of the custom Steinway, its exterior designed for Oceania by furniture icon Dakota Jackson … Melting into one of the tiled loungers in the spa’s relaxation rooms, or sunning in one of the pool deck’s plush day beds … Choosing some fromage off the cheese trolley at Jacques … or — as is really the thing to do on these port-heavy voyages — Getting off the ship and exploring the world.

Pools: Main pool, three whirlpools (including one at the spa)

Itineraries: Most of Marina’s itineraries are 10 and 12 nights. In September, October, and November 2011 it sails the Aegean and Eastern Mediterranean from Venice, Istanbul, Athens, and Rome. From December 2011 to March 2012, it sails Caribbean itineraries from Miami. From there, Marina returns to Europe to sail the Med and Aegean in April and May, the British Isles in June, the Baltic in July and August, and the Aegean and Med again in October and November. 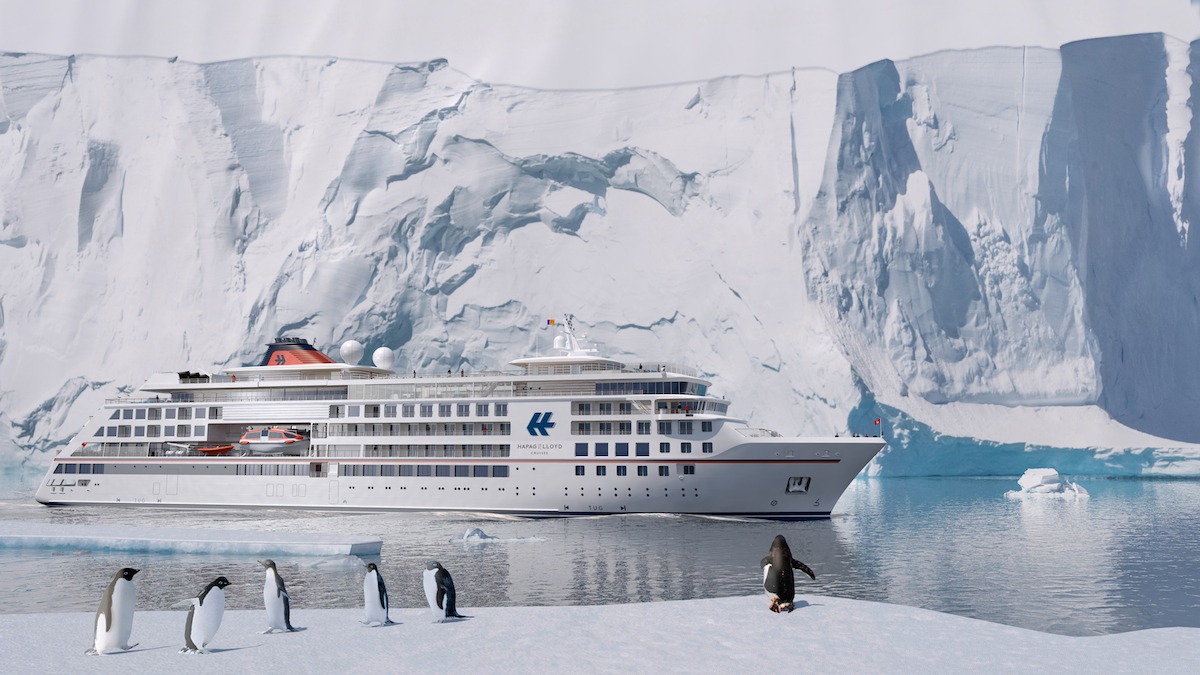 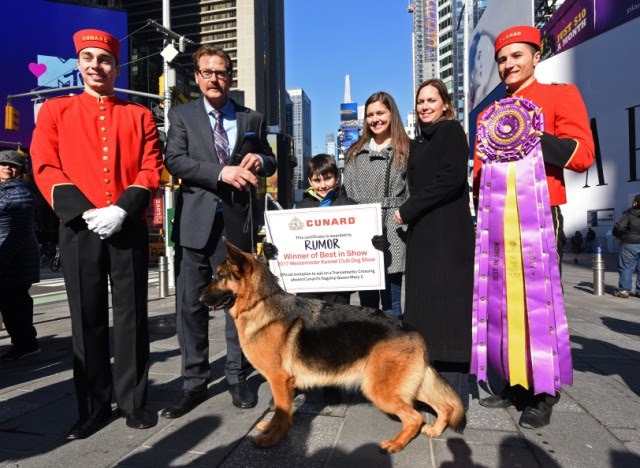 January 10, 2020 By Evan Gove
Cruise Deal of the WeekFeatured

Today we have a cruise deal from one of the top names in cruising, Royal Caribbean! Mariner of