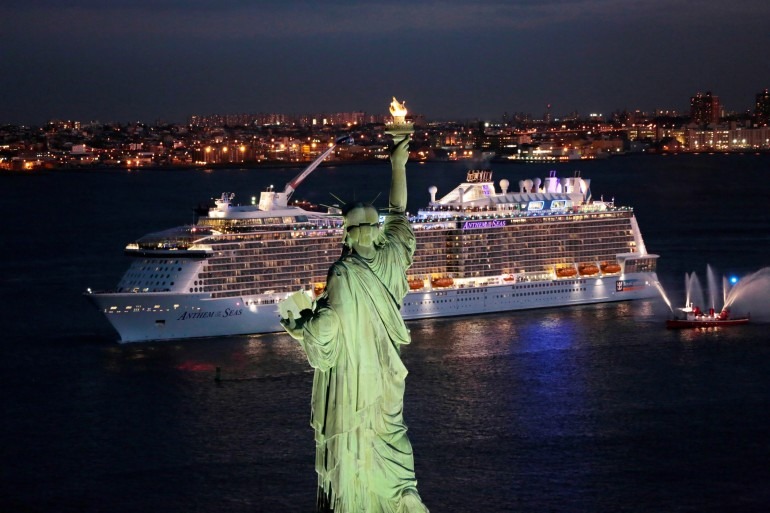 Royal Caribbean’s newest addition to the fleet is a sight to behold. Anthem of the Seas can house 4,905 guests in 2,090 staterooms and, at 1,141 feet long, lays a claim at being the third-largest cruise ship in the world. It has its own skydiving simulator (Ripcord by iFly), a portable wave for surfing (FlowRider), bumper cars and a roller rink (in SeaPlex), and even robot bartenders (at Bionic Bar).

The ship is a high-tech marvel that’s been carefully designed so that wherever you turn, you’re bound to see something amazing.

After enjoying the inaugural cruise from Cape Liberty, here are our five favorite views from Anthem of the Seas.

Something like an ocean-going London Eye, this viewing capsule lifts thrill-seekers more than 300 feet above sea level, giving a 360-degree perspective on the mighty ship and the ocean she’s sailing in.

It was definitely the peak attraction of this sailing – the lines often snaked out of the entry stairs and onto the deck. The ride, though, was worth the wait. Breathtaking. 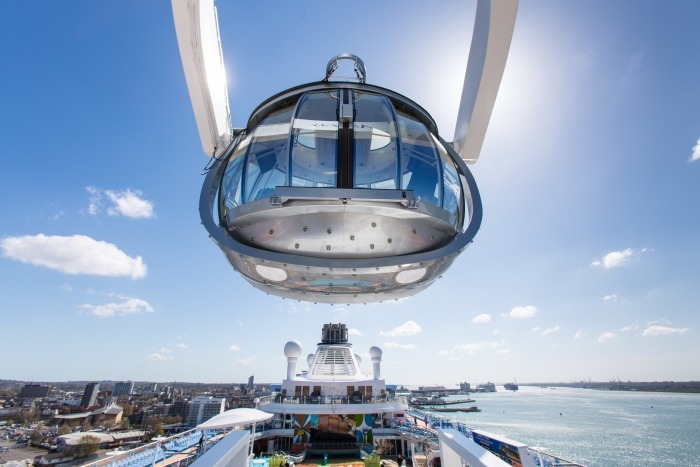 More than any other space on board, Two70 sums up the way Anthem of the Seas blends technological achievement and natural beauty. It’s a lounge and theater with a 270-degree view of the ocean off the stern of the ship – one of the best views of the horizon, especially during sunset. (It’s also one of the most comfortable – and sensible – places to hold a muster drill, so kudos to whoever had that idea.)

In the evenings, the floor-to-ceiling windows are concealed by Vistarama screens, allowing 18 projectors to create a shifting panorama 100 feet wide and 20 feet tall. Sometimes, it’s a forest with falling leaves. Sometimes, it’s a landscape of red velvet curtains, gradually opening onto a virtual stage.

During performances, it becomes part of the show as a dynamic, animated backdrop.

The real center of attention, though is the RoboShow: six projection screens mounted on robotic arms that move, twist, and reconfigure themselves in different patterns. The performers on stage (we were wowed by the dancing, singing, and acrobatic talent showcased in Spectra’s Cabaret) can actually interact with RoboShow, seeming to leap into the projectors’ virtual world. 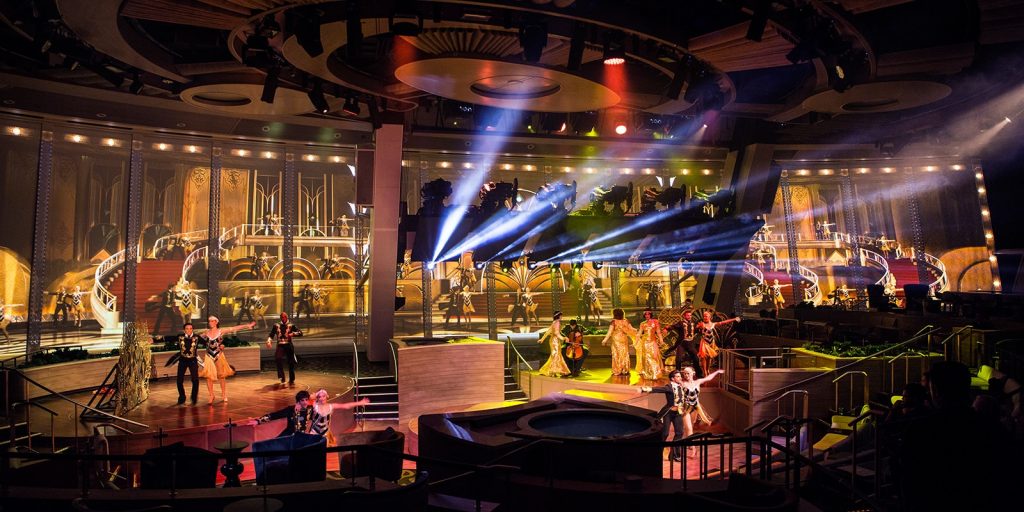 If you’ve ever got a chance to tour the bridge on one of the world’s largest cruise ships, go for it. For one thing, it’s a technological marvel – the navigation controls have no less than 20 backup systems, with enough fine control over the azipods (the electric engines that swivel under the ship’s hull) to spin the massive ship 180 degrees around in six minutes, and there are screens showing wind speed, Doppler radar, any information you can imagine about what’s going on around and aboard the ship.

For another thing, the bridge has one of the best views forward … and, at the navigation station, straight down.

If the bridge makes a kind of “T” sticking out over the lower decks, the navigation station is in one of the arms crossing the “T,” and, as Captain Claus Andersen explained, it’s where the controls used for docking are located. To give the crew the best possible perspective on how close the ship is to the dock, there’s a window in the floor.

It’s a psychological test, he joked. Looking down between your feet the equivalent of 10 stories to the roiling sea off the edge of the hull, it’s easy to get unnerved. It’s also amazing.

Where You Least Expect It

One of the fun things about Anthem of the Seas is the way pieces of art sneak up on you in the most unexpected places.

You might step into an elevator to be greeted by a formally dressed feline in glasses (and, one night, a real-live ragtime pianist slipped into an elevator to serenade guests). Look through the wall of your glass elevator, and you’ll see a larger-than-life gilt cherry tree, half tranquil Japanese painting and half Vegas glitz. Walk down the passage to your stateroom, and you’ll pass occasional inspirational messages … or an image of a young lady listening to 45s on a vintage turntable. Walk down a stairway, and you’re suddenly face-to-ahem with a giraffe’s rear-end, framed by a bright pink floatie. Walk by the shuffleboard court, and half a 1960s VW camper will remind you to “Seize the Day!”

There are art experiences everywhere. 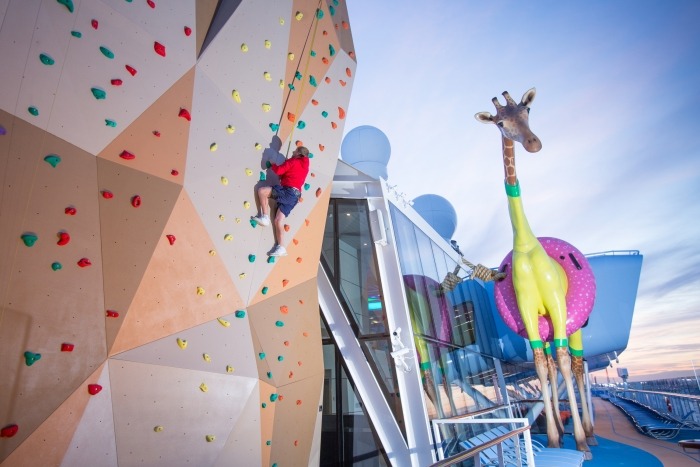 The Top Deck Railing (or anywhere outside)

The ocean is always beautiful, and this ship has found ways to maximize that. There’s the aforementioned Two70 over the stern, but high above the bow, the greenery of the Solarium commands an equally stunning ocean view, with terraced pools, a giant swing, and the Sunshine Bar (specializing in juices and smoothies, as well as more intoxicating beverages).

The highlight of cruising on Anthem out of Cape Liberty, however, has to be the view of Manhattan as the sun descends. Those nimble azipods spun our ship around in the Hudson as the city lights turned on, giving both sides of the ship a view of the city and Lady Liberty before sailing out of New York Harbor and into the open ocean.

That was truly unforgettable. 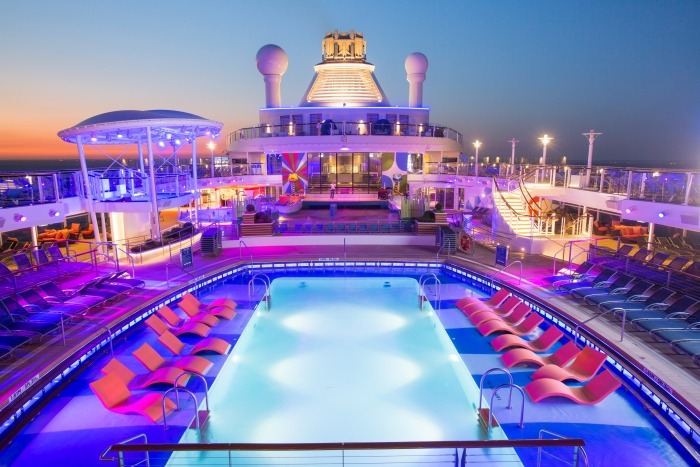 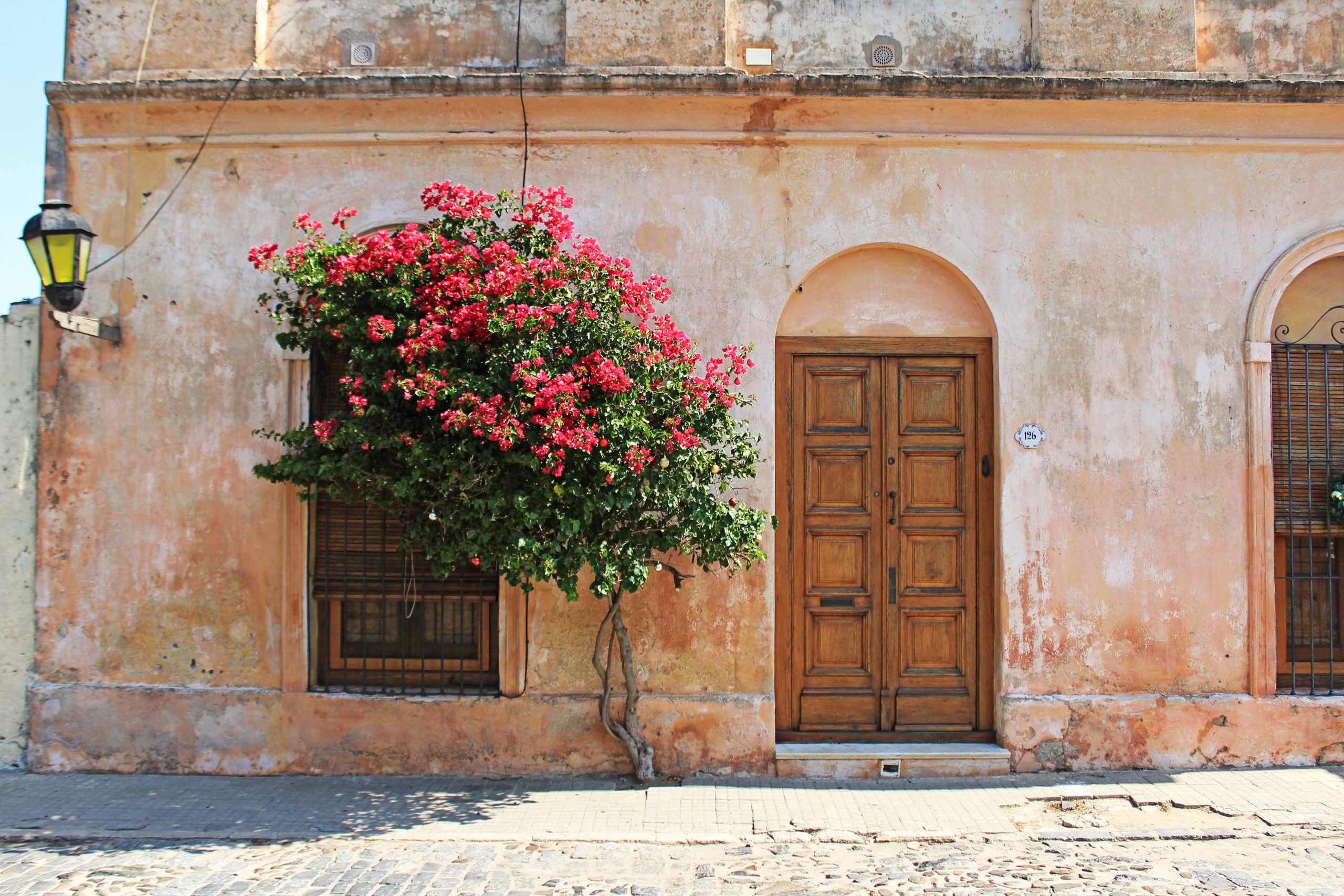 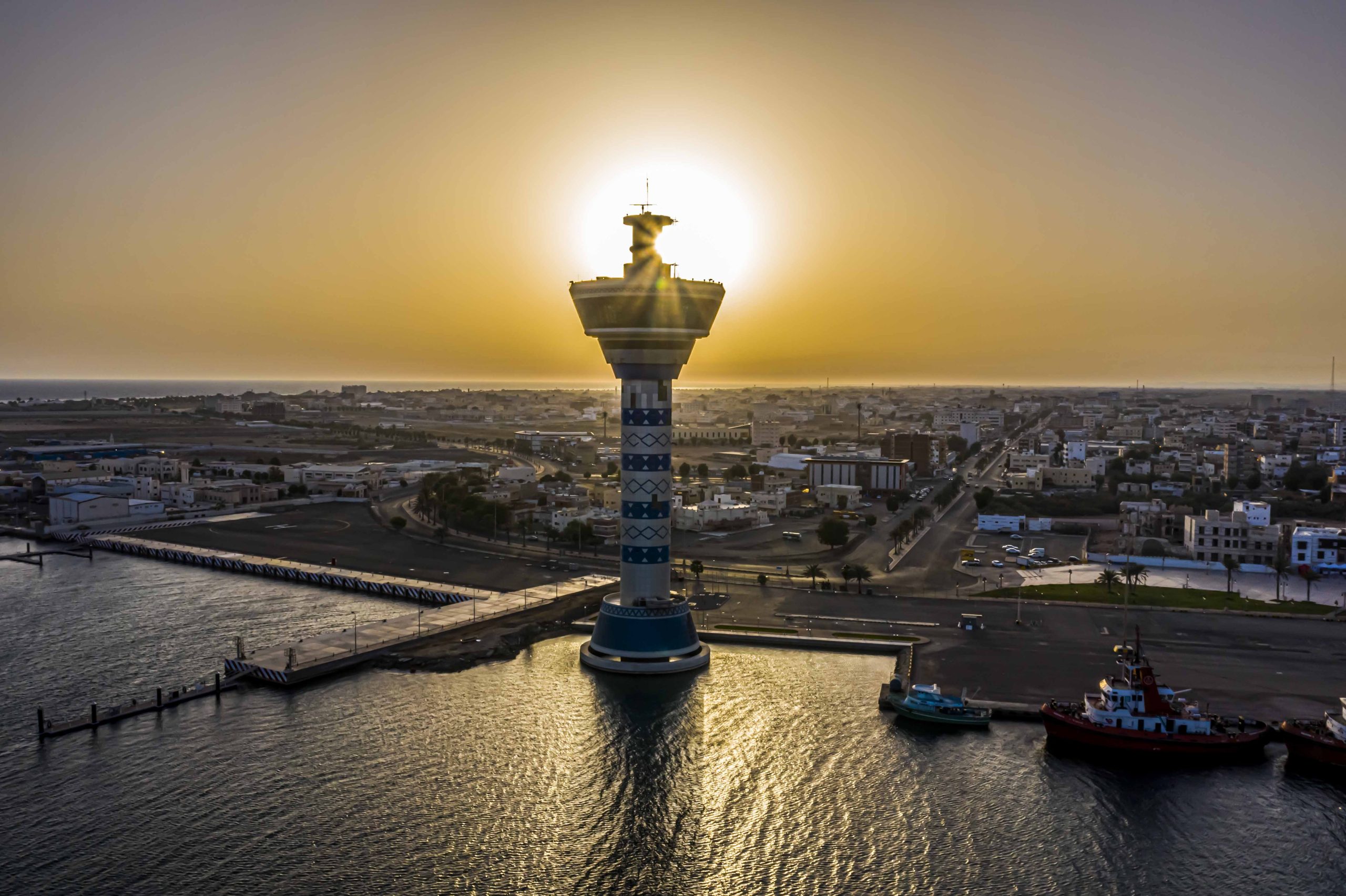 Saudi is an exciting destination with a rapidly expanding tourism industry. The country offers not o 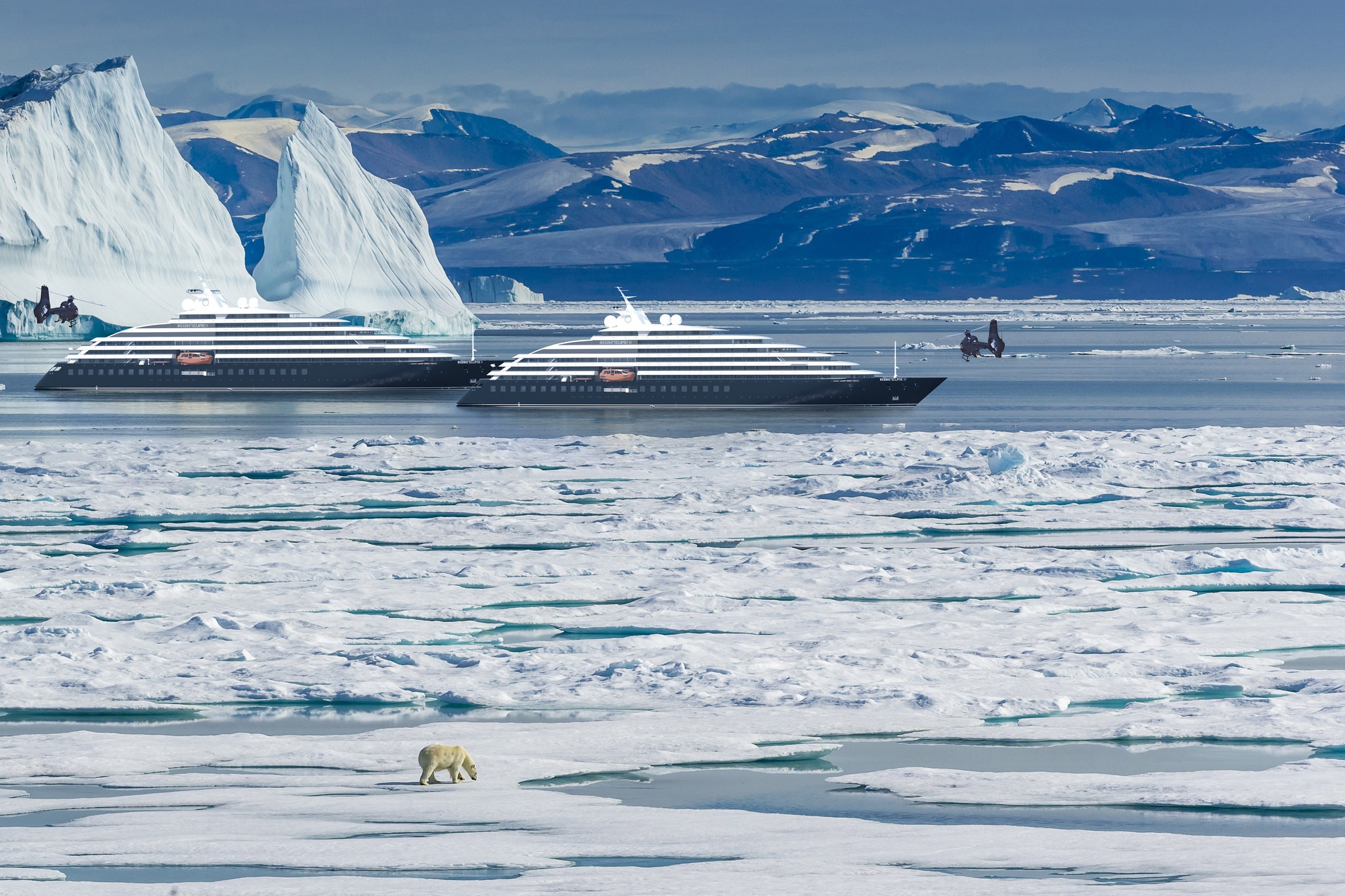