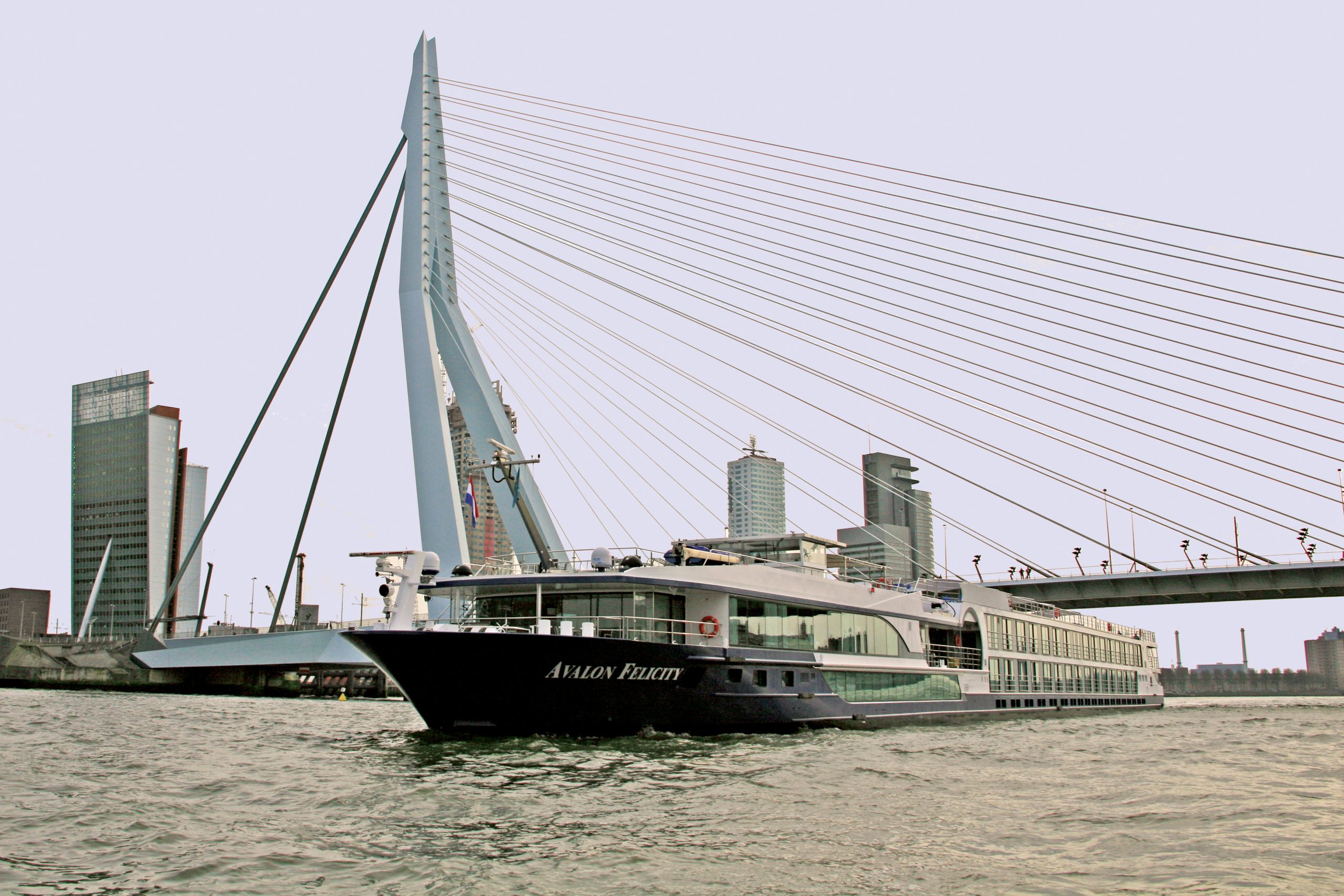 Jim and Marion Rose found what they were longing for on the new Avalon Felicity: an up-close-and-personal tour of Europe from the decks of a small river ship brimming with sophistication and elegance.

The newest addition to the Avalon Waterways fleet, Avalon Felicity features the luxury of an ocean liner with the intimate ambiance that only a river ship can provide. “It’s very relaxing,” the St. Louis couple told us as we sailed from Amsterdam to Belgium, admiring magnificent countryside and colorful communities. “There are no worries about big waves, plus we can visit towns that are inaccessible to big ships.”

This was our first river cruise and, like the Roses, we were hooked. Patrick Clark, managing director of Avalon Waterways, says that at least half of the line’s passengers are veteran ocean cruisers who are looking for a small ship feel and an itinerary that includes constantly changing scenery along historic rivers. “Our growth has been approaching 10 percent for the past half-dozen years, and we expect that growth to continue for the next decade,” Clark says.

Intimate itineraries have much to do with Avalon’s success. “We cruise through the heart of Central Europe,” Clark says. “With frequent stops in the middle of towns and villages, guests get right inside the countries we visit.”

Avalon, Clark says, is the fastest-growing river cruise company in Europe and has the youngest fleet, just two years on average. Avalon Felicity, launched this spring, is its ninth vessel and incorporates the latest technology as well as creature comforts that set the industry standard.

Marco Rizzi, the executive responsible for design, says that Avalon ships are contemporary with a unique, modern style that minimizes engine noise and maximizes the amount of glass in the lounges, restaurant, and staterooms. “The idea of river cruising is not just about being on a vessel. It’s about having the panorama passing by in front of you.”

Avalon’s ships are compact to navigate the canals, locks, and low bridges of European waterways (Avalon Felicity is 361 feet long with three decks) but none of our shipmates missed the casino, big theater, or specialty restaurants of ocean cruise ships. Most excursions on Avalon ships are complimentary and almost everyone is up early to take advantage of them.

In addition, little touches such as fresh flowers in all staterooms and public areas enhance the experience. As a guest from Toronto told us, “This is a perfect-size ship. The staff is great, we’ve made many new friends and the stops are excellent. It’s just a wonderful way to travel.”

Avalon Felicity offers some of the largest and best-equipped staterooms on European waterways. All 65 of them are 172 square feet plus there are four junior suites at 258 square feet. Clever design makes them appear even more spacious with plenty of storage space, well-placed mirrors, and a color scheme (primarily dark brown and cream) that’s inviting and relaxing. The beds, with high-quality Egyptian cotton sheets and duvets, can be made into twin or queen configuration. Climate control is excellent.

Most staterooms are on the second and third decks and all have floor-to-ceiling glass doors that slide open to reveal a French balcony. It’s a delightful, open-air experience to lie in bed and watch river traffic and the magnificent European scenery glide gently by.

An LCD TV offers many choices including five English-language news channels (three American and two British). In addition, there’s a wide selection of free movies on demand, many of them related to the countries visited. (For example, after touring Arnhem in the Netherlands, site of an ill-fated battle in World War II, we watched A Bridge Too Far, the film about the event.)

The bathroom is impressively large for a small ship. Better, in fact, than many we’ve had on large cruise ships. Well-lit, it has an oversized sink, plenty of room for toiletries, and a roomy, glass-enclosed shower stall with modern controls and always lots of hot water. The only room shortcomings we noted were lack of efficient reading lights by the bed and a safe that was complicated to use.

Impressive. For a ship with just 138 passengers, we were blown away by the quality and variety of the cuisine on board. The single dining room, with open-seating tables for four, six, or eight, can accommodate all passengers and is bright (full picture windows along both sides) and spacious with a clever room divider down the middle using picture frames and fresh flowers.

Buffets are offered at breakfast and lunch with choices equivalent to ships many times its size. At lunch, there are two tasty soups available (one hot, one cold), a carving station (beef, turkey, or ham), plus meat, fish, and vegetarian dishes. Our favorites included tender braised veal shank and tasty cod fillets in a light, tempura batter. In addition, the salad bar was outstanding in its freshness and variety, and desserts (with two types of ice cream each day) were excellent. For a lighter lunch, sandwiches are offered in the main lounge and, on fine days, there’s a grill on the sun deck.

Executive chef Andreas Weber and his five assistant chefs and cooks take particular pride in dinner. Usually a leisurely affair (two hours or more), the five-course meal features international favorites with local specialties. An amuse-bouche is followed by a choice of two soups and an imaginative salad. Sorbet to cleanse the palate precedes a choice of three entrées each evening (plus standing orders of grilled chicken or roast salmon). We were impressed by the beef tenderloin (tender and beautifully prepared) as well as the rack of lamb, crispy roast duck, fillet of halibut, and sea bass. Thankfully, portions were not huge, but just the right size.

Wine — usually French, Spanish, or German — is complimentary throughout the evening meal and waiters make sure your glass is always full. Desserts are universally excellent. On our last evening there was even a Baked Alaska parade, complete with sparklers.

The social center of Avalon Felicity is the main lounge at the front of the ship on Deck 3. Here, there’s a well-stocked bar with friendly waiters, lots of comfortable chairs, and a panoramic view through wall-to-wall windows on three sides. Happy hour, with drinks at half-price, is offered before dinner.

Unlike most river cruise ships, there’s a second lounge at the stern. It’s smaller than the main lounge but also has wraparound windows. It includes a 24-hour coffee/cappuccino/espresso machine, an assortment of teas, fresh fruit, and cookies plus a small library.

The marble-floored lobby, in the center of the ship, is the gathering place for excursions and meetings with the front desk staff and cruise director. Here, crewmembers welcome passengers back from outings with refreshing towels and drinks. There are also two computers in the area with Internet connection.

With its generous public spaces and relatively few passengers, Avalon Felicity never seems crowded. Both interior lounges have plenty of room, but the Sky Deck, running almost the full length at the top of the ship, is a wonderful way to embrace Europe from the comfort of a deck chair. There are several canvas canopies for shade and a large whirlpool for relaxing after a day of exploration.

Those needing a workout will find a small fitness center on the lower deck. It has just three machines but plenty of bottled water and, through the window, a good view of life on the river. In addition, there’s a hairdressing salon on the third deck with a full-time attendant.

Because of their relatively small size, evening entertainment on most river cruise ships is necessarily limited. Most nights, a leisurely dinner was followed by a nightcap in the lounge with entertainment by a resident pianist.

On three of the seven nights of our cruise, special activities were added. There were two illustrated lectures, one on the history and lore of diamonds as we approached Antwerp, Belgium, and the other on the Netherlands’ ongoing battle to protect the vast, flat country from inundation by the sea. That lecture was followed the next day by an extraordinary visit to the Delta Project, part of the extensive dam and dyke system that controls the water.

The most entertaining evening, however, was provided by La Strada, a trio of classical artists (two violinists and a guitarist) from Brussels who joined the ship in Antwerp and played for an hour in the main lounge. The virtuoso performances of light classics and show tunes were some of the best we’ve ever heard.

The ship’s cruise director told us that Avalon would love to have kids aboard their ships, but it’s a question of whether young people would enjoy the experience. Entertainment and facilities are simply not geared to children.

Occasionally, parents or grandparents bring their curious offspring with them to experience Europe and its history. In addition, management is currently discussing the idea of special-interest cruises in the future where there’d be activities for children and families, but nothing is definite yet.

Because of its compact size, it doesn’t take long to check out every area of this new and brilliantly designed ship. The crew takes as much pride in the vessel as its lucky passengers and it’s worth getting to know your waiters, your room attendants, and the friendly people who work at the front desk. They’re all very approachable and love to chat about their jobs and the pleasures of river cruising.

Inaugural Sailing: March 27, 2010
Passenger Capacity: 138 on three decks
Staterooms: 69, including four junior suites. All with outside views and 85 percent with sliding glass doors and French balconies.
Pools: One large whirlpool on the Sun Deck.
Show Venues: There’s a piano corner in the main lounge and an entertainment area for small groups of performers.
Onboard Shopping: Avalon souvenirs are on display in the lobby and available from the front desk.
Communications: Wireless is available throughout the ship and there are two computers in the lobby.
Itineraries: Avalon Waterways and its fleet of modern ships have a wide range of cruises along the Rhine, Rhone, Danube, Main, Moselle and Seine Rivers. For details:
www.avalonwaterways.com 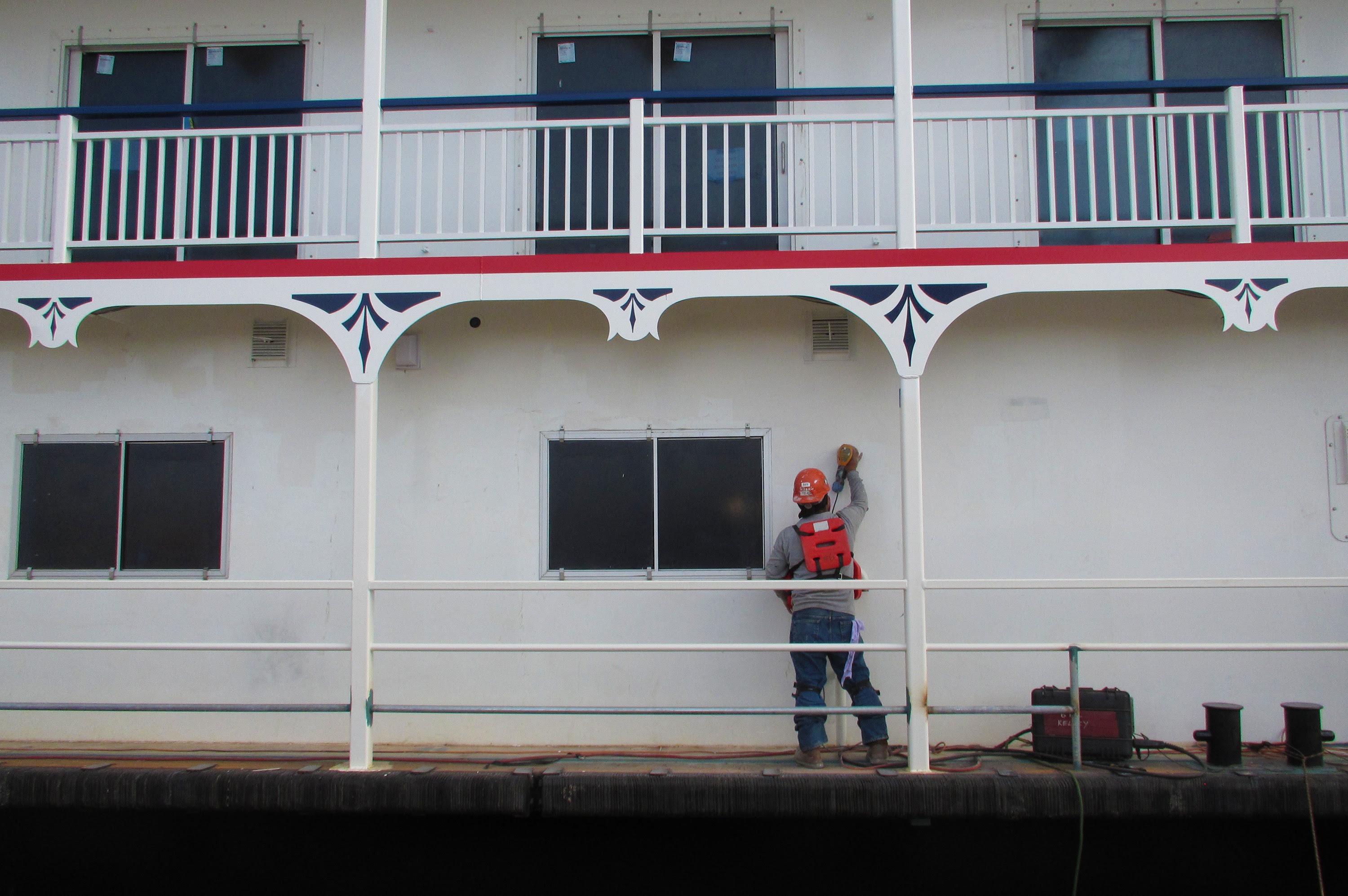 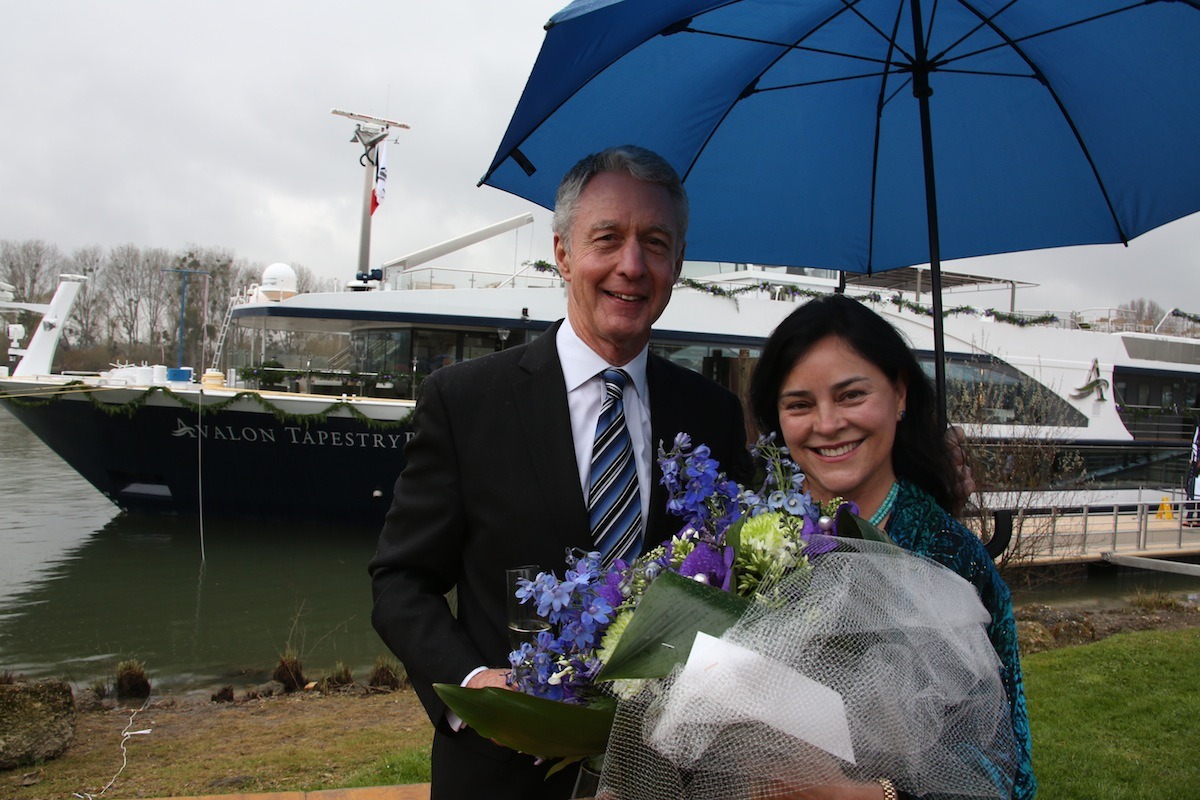