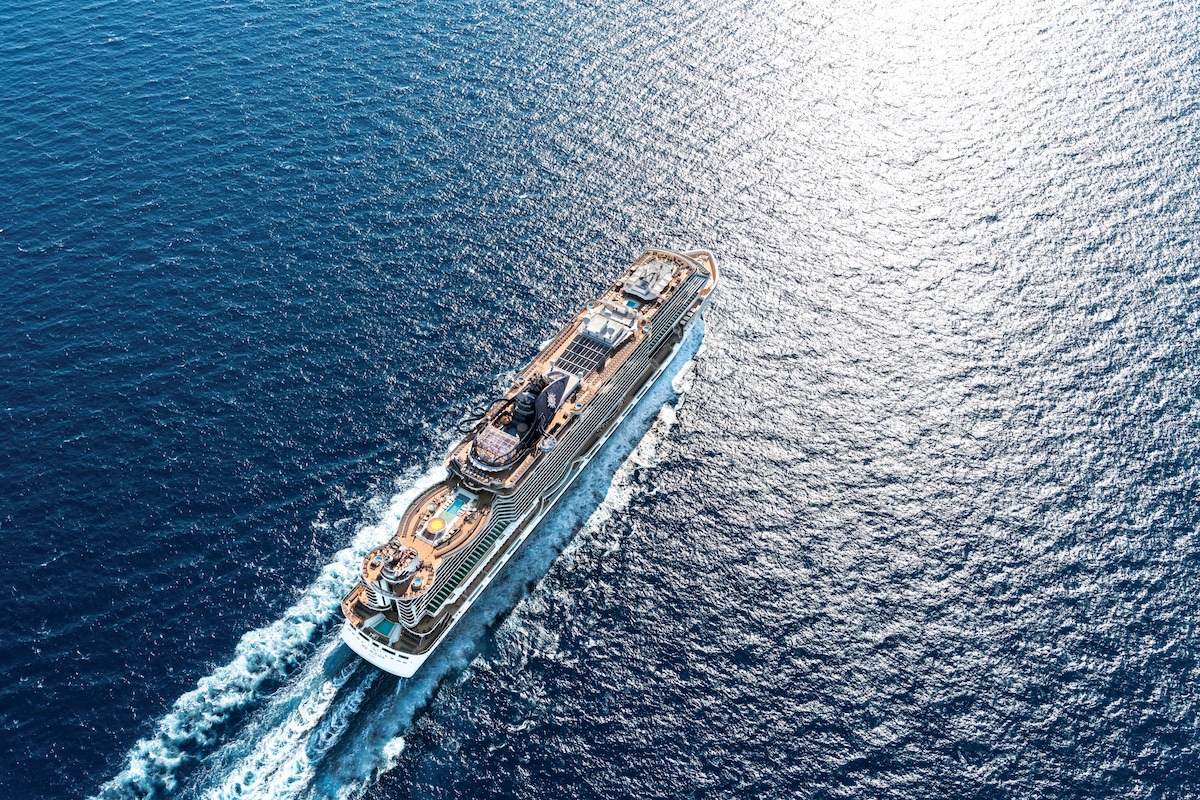 Last June, as we approached Genoa, it looked like a fancy new building had been plunked alongside the historic Stazione Marittima, the onetime departure point for legendary trans-Atlantic liners like the Rex, Andrea Doria, Michelangelo, and Raffaello. Upon closer look, of course, the 17-story, glass-fringed edifice looming over the palatial art deco terminal was the stern quarters of the MSC Seaview. Fresh from Fincantieri’s Monfalcone shipyard (near Trieste), MSC’s latest mega cruise ship was being prepped for its christening ceremony — a gala that would be presided by the line’s serial godmother Sophia Loren and culminate in spectacular fireworks. On board, shipyard workers were still finessing some of the finer details as travel dignitaries and members of the international press inspected the fast-growing line’s latest hardware, just days before it embarked on its sold-out maiden voyage. 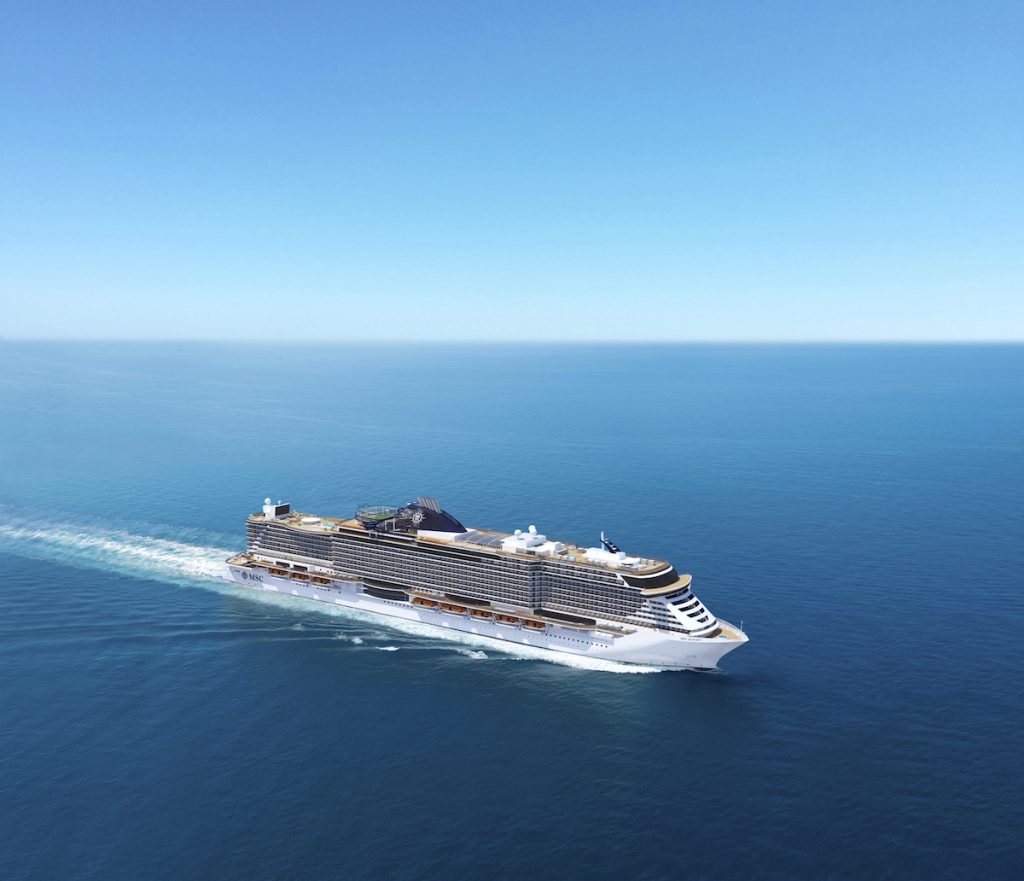 Following in the wake of the 2017-built MSC Seaside, the nearly identical MSC Seaview is the second in what will ultimately be a class of four innovative vessels that blend traditional design elements with all the latest seagoing gadgetry and technology. At 153,516 gross tons and with a capacity for 5,179 double-occupancy guests, these ships make a bold architectural statement. Superstructures soar vertiginously above wide, barge-like hulls and sterns that, yes, are intentionally designed to emulate a Miami Beach condo tower. Beyond the ships’ unapologetic scale, there is superficial detailing that MSC’s design team has finessed to give the impression of speed and power, such as the V-shaped cluster of balconies in the forward superstructure, the trellised caging around the funnel and the glass-bottomed Bridge of Sighs walkway that defiantly protrudes 10 decks over the stern.

While MSC Seaview is a far cry aesthetically from, say, the sumptuous 1953-built Andrea Doria (which was considered one of the most beautiful liners ever to grace the seas), the two do share a design trait or two in common. Unlike most passenger ships built since the late 1960s, MSC Seaview’s funnel and heavy engines are situated in the center of the ship, a factor that along with its wide beam and deep draft, provides more stability in rough seas. In another nod to tradition, the outdoor Boardwalk on Deck 8 reinvents the classic promenade where guests can lie in a deck chair, sip a beverage, or take a stroll within an invigorating proximity to the gurgle, salty spray and ever-changing panorama of the sea. With all that open deck area, extra attention has been paid to connecting this ship’s guests with their watery surrounds. Even on the inside, the handsomely decorated public spaces are infused with natural light via full-length windows that offer spectacular ocean vistas. 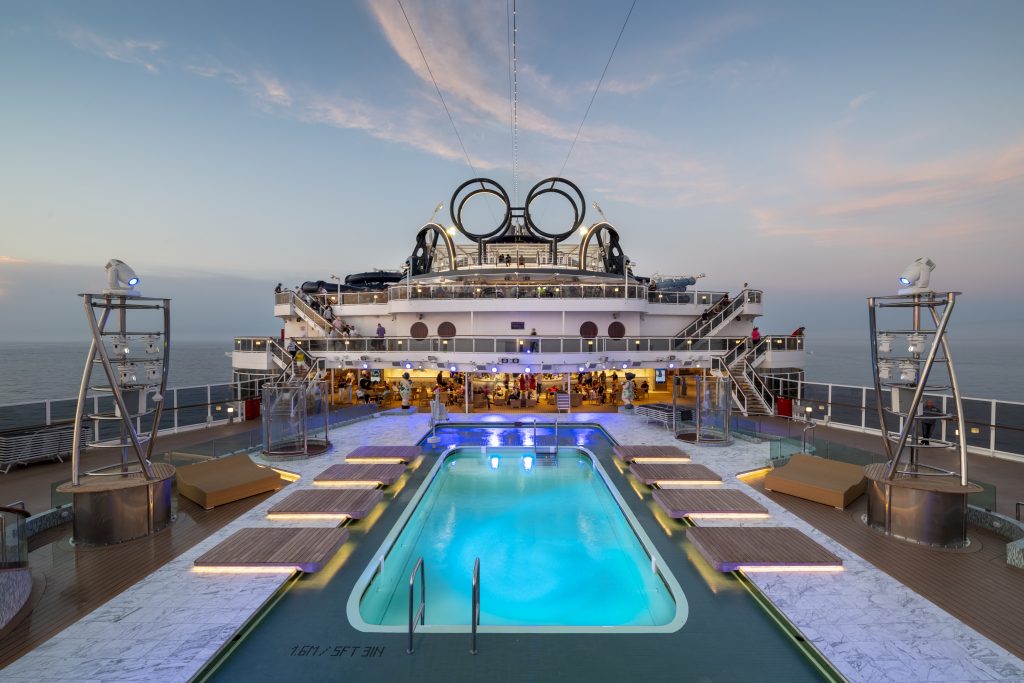 Seaview’s more prominent bells and whistles include a zip line that soars 345 feet from the funnel past the Panorama lido area with its pool, a trio of Jacuzzis, loads of sunning space, a giant LED video screen, and even a bandstand that can double as a helipad. There’s another pool for those aged 16 and over in the Sunset Beach lido area at the base of the “condo” on Deck 7, the sliding-glass-dome-covered Jungle Pool area (complete with faux jungle foliage) on Deck 18, and, of course, an exclusive pool area for guests staying in the deluxe Yacht Club ship-within-a-ship. In addition to the pools, there is also the multi-story Forest Aquaventure water park with its huge dunker, rope bridges, and quartet of slides, two of which loop over the side of the ship.

In the heart of MSC Seaview, three full decks of public rooms include a glass-walled atrium (traversed by Swarovski crystal–studded staircases) that features a multi-level stage and giant LED-screen backdrop for live music performances. Although the showroom has been scaled down a bit from those of other MSC ships, it’s still the setting for eye-popping extravaganzas that combine cirque-style theatrics, video imagery, and lighting effects. Since MSC caters to an international demographic, instrumental music is largely featured in shows with names like Bizarre, Illusion, and Emozione. In addition to these epic venues, Seaview has numerous smaller bars, a shopping arcade, casino, and the world-class MSC Aurea Spa. 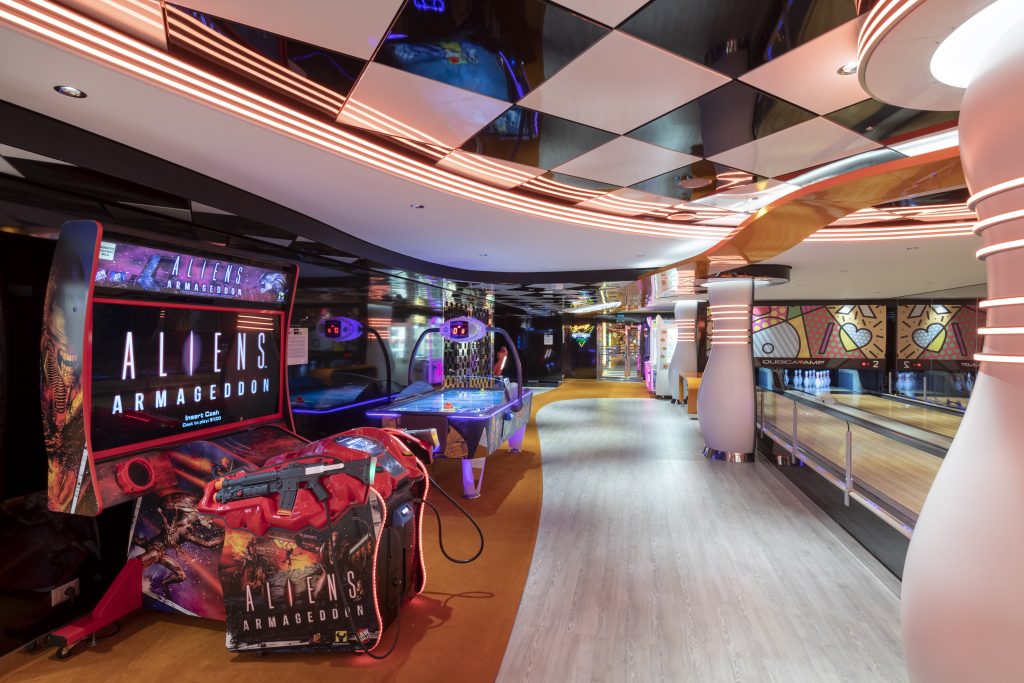 Dining options abound, with two traditional, included-in-the-fare restaurants, the Golden Sand and the Silver Dolphin, which in typical MSC style can get a bit congested and noisy at peak times. Dinner on the Seaview tends to start later than American-based ships: There are three seatings, the last of which begins at 9:30 (and when the ship is cruising Brazilian waters, even later). Also, it should be noted that when MSC ships are in Europe, some familiar American dining conventions, such as providing complimentary tap water or iced tea, are non-starters.

At the Marketplace buffet, in typical Italian style, breakfast is on the lighter side, although lunch and dinner brim with some very tasty options. Choices are more limited than what most U.S.-based ships offer and the quality of the food can vary, although Italian specialties like pasta, freshly baked breads, seafood, grilled vegetables, and any dishes that involve extra virgin olive oil and/or genuine Parmigiano-Reggiano are often excellent.

Extra-tariff, alternative dining options include the Butcher’s Cut steakhouse and L’Atelier Bistrot for French-inspired bites as well as new-to-MSC venues like celebrity seafood chef Ramon Freixa’s Ocean Cay and the Asian Market Kitchen, affiliated with sushi chef Roy Yamaguchi. There are also two gelato venues and the Venchi Bar for hand-crafted chocolate treats and specialty coffees to add some extra joy and an inch or two to the waistline. 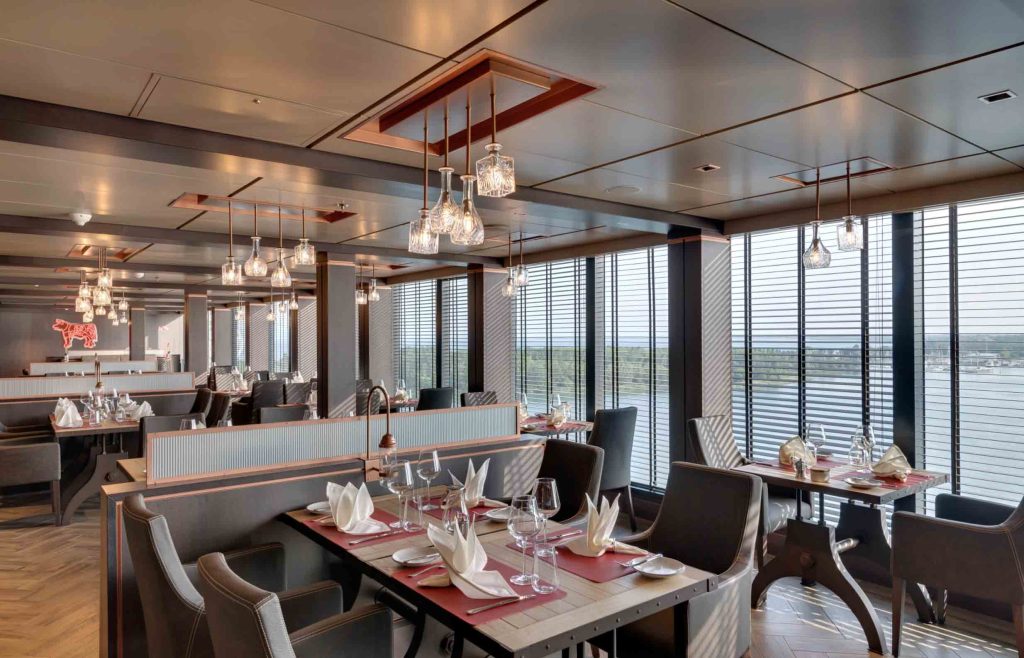 MSC Seaview is Homes Away From Home

MSC is big on family travel and often promotes free or discounted fares for kids, which during summer and holiday season can be somewhat chaotic for those looking for a quiet getaway cruise. That said, if you want to bring the bambini, this class of ship has an impressive LEGO-affiliated youth program with age-specific venues as well as the aforementioned waterpark, a sports arena, a bowling alley, a Formula 1 racing simulator, and an interactive XD cinema. Further, there are 108 balcony cabins designed to connect with one or both adjoining cabins, accommodating as many as 10 guests together in a three-balcony set.

Eleven categories of handsomely appointed accommodations range from 150-square-foot Interiors to a pair of 667-square-foot Royal Suites. Yacht Club guests have their own private lido and pool area, a concierge lounge and an exclusive restaurant as well as VIP privileges like priority boarding, priority seating in shows, priority reservations in the specialty dining rooms and butler service. However, just as it was in days of yore, most of the fun and attractions are in the main part of the ship, where the “regular” folks reside. 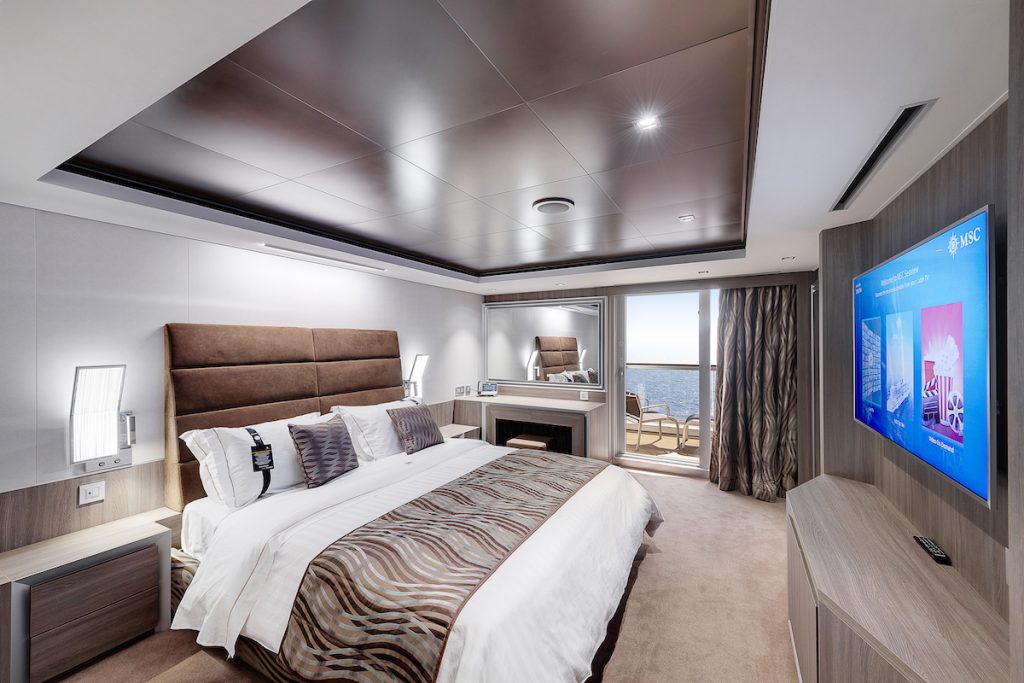 MSC Seaview cruises the Mediterranean in the summer season and crosses to Santos, Brazil, for winter South American departures. Fares begin at $139 per person, double occupancy (plus applicable taxes) for a 2-night sailing from Barcelona to Marseille in April.

Wow what a week for cruising! We got the opportunity to check out not one, but TWO brand new ships c 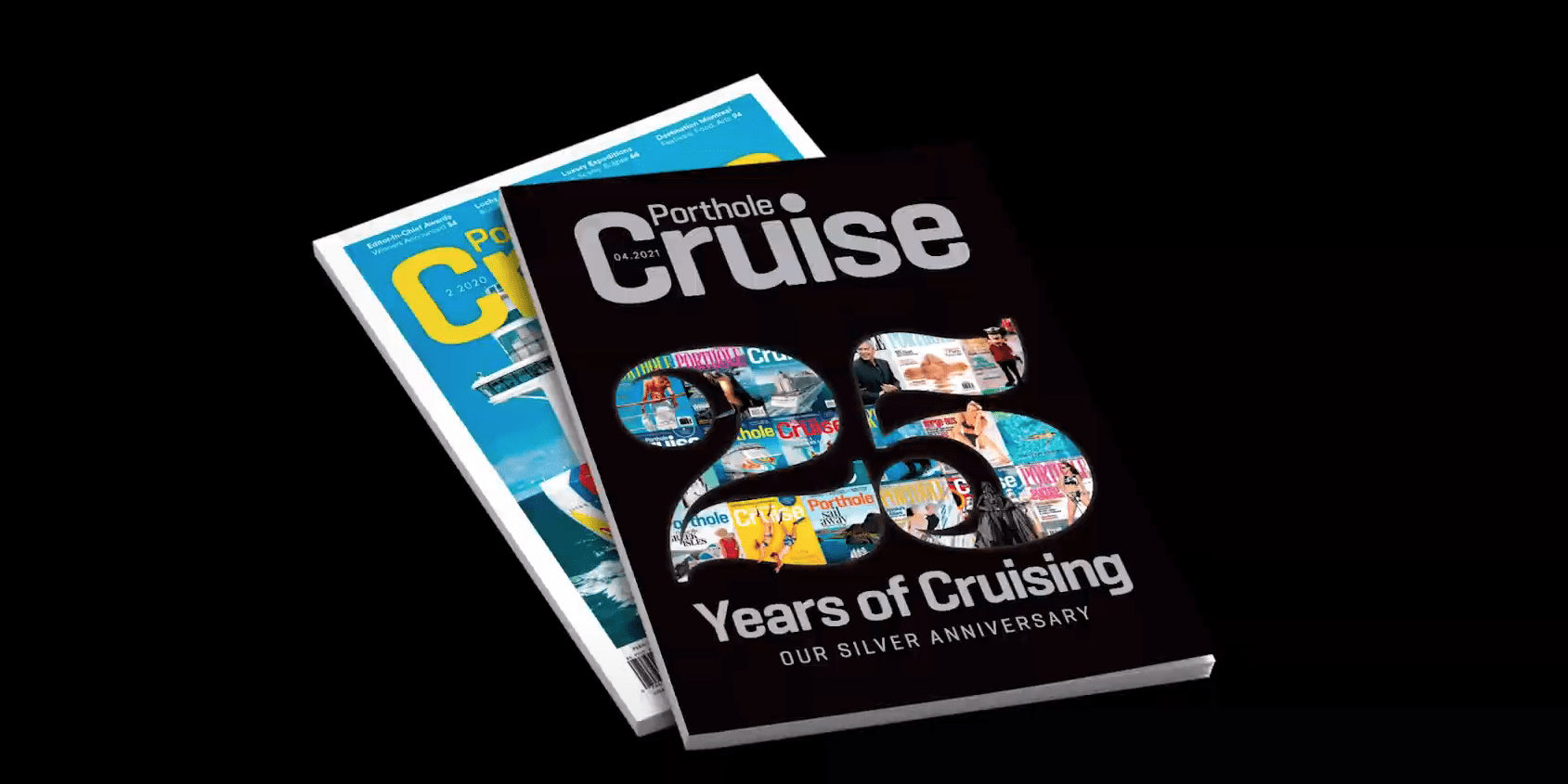 Time flies when you’re having fun! And trust us, there’s nowhere better to have fun than