Skip to the content
October 16, 2011 By Porthole Cruise
Magazine Excerpts

Atlantic Canada — or the provinces of New Brunswick, Newfoundland and Labrador, Nova Scotia, and Prince Edward Island — is a popular cruise destination that boasts adventures in numerous forms and varying degrees of challenge.

If you’ve never tried kayaking, there are many quiet inlets where you can safely paddle. Want to cycle without killing your knees? Then Prince Edward Island’s gently rolling terrain is idyllic. Maybe you want to hike up the trail in St. John’s, Newfoundland and Labrador, where Guglielmo Marconi sent his first trans-Atlantic signal and listen to the surf crash before going for dinner and bravely tasting cod tongues. Or perhaps you prefer to find a nearby beach where you can stroll down to the water and touch a growler that has rolled ashore from a passing iceberg.

Whether on land or in the water, Canada’s four easternmost provinces offer the kind of once-in-a-lifetime adventures that you can’t wait to write, phone, or text home about.

Some of Atlantic Canada’s adventure is courtesy of nature. The Reversing Falls in Saint John, New Brunswick, are caused by the rise and fall of the world’s highest tides. The unique tides in the Bay of Fundy result from waves originating in the South Indian Ocean. The currents swish around Cape of Good Hope before heading northward toward Canada.

At Saint John, the tide rises up to 28.5 feet. When it washes out, the entire 450-mile Saint John River empties into the Bay of Fundy. The full flow of the river tumbles through a narrow gorge and then drops into a deep pool where it cascades through a series of rapids and whirlpools as it goes out to sea. When the tide rises again, it slows and finally stops the river’s flow. When the bay starts to rise again, the river flows upstream. As more of the tide rolls back, the reverse flow increases and the rapids form, reaching their peak at high tide.

The phenomenon occurs about once every 12.5 hours. The adventure is to be on that spewing water aboard the Reversing Falls Jet Boat. The ride is part of many cruise line shore excursions that begin with a morning tour of Saint John’s most historic and scenic attractions followed by a yummy lobster roll lunch in Reversal Falls Park. 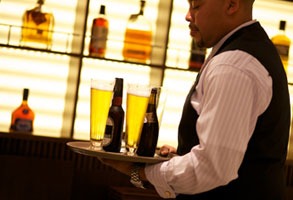 Battle Of The Crab Cakes

With so many different ways to cake a crab, it’s no wonder so many cities — and foodies — have

UKULELE CRUISES The Key of the Sea–On a ukulele cruise, everybody comes out to play.. By Clark